Should AYUSH aspirants prepare for NEET? NEET 2018 is just around the corner and it is expected that the application form for NEET 2018 will be available by the end of January 2018. As per the latest news reports, the students who aspire to get admission in AYUSH (Ayurveda, Yoga and Naturopathy, Unani, Siddha, and Homoeopathy) will also have to appear for NEET 2018.

There are various colleges which, until now, conduct its own entrance examination to offer admission to candidates in AYUSH courses. Entrance exams such as Amrita University BAMS Exam, Punjab Ayush Entrance Test (PAET), CEEAH Gauhati, HP BAMS / BHMS, MP PAHUNT were conducted for admission to AYUSH courses. However, the respective colleges have not yet issued any notification whether the admission will be on the basis of NEET or not.

On the other hand, Karnataka Examination Authority (KEA) released the notice for Common Entrance Test 2018. According to it, KCET will be considered for AYUSH admission in the academic session 2018-19. It is also specified in the notice that the score of NEET 2018 will be considered for admission to Medical and Dental courses only. The KEA CET 2018 will be held on April 18, 19, and 20, 2018. The application form for KCET 2018 is expected to be out soon. 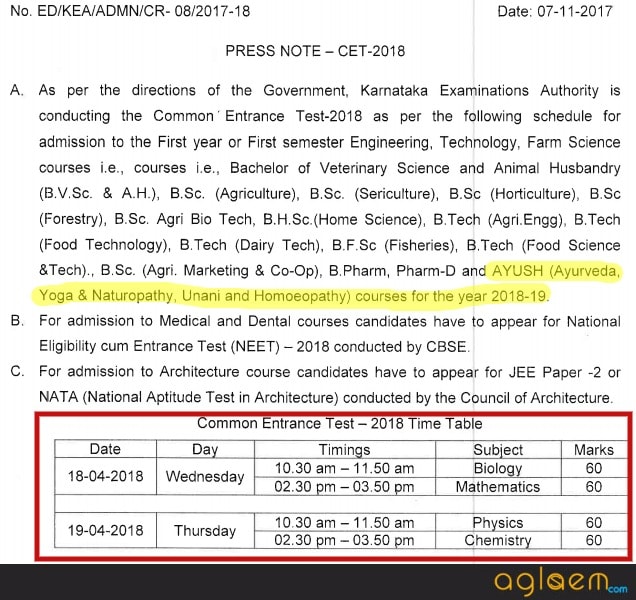 Last year, the Central Council of Indian Medicine sent letters to the Chief Secretaries and Health Secretaries of all States that NEET would be the single entrance test for AYUSH courses as well (besides medical and dental). However, the State government conducted the CET and allotted seats on the basis of the candidate’s performance in the test. 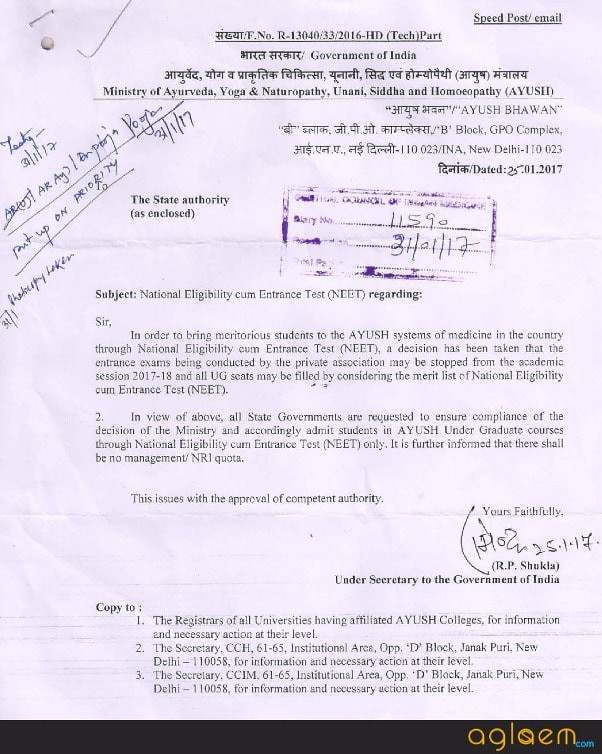 The ministry is still in talks with the Central Board of Secondary Education (CBSE) to conduct the examination. As per the reports, close to 36,000 seats are available under the Ayush system for various undergraduate courses, and for which state universities conduct entrance examination individually.

The uncertainty over NEET for AYUSH is keeping the students awake at night are unsure whether they have to write the Common Entrance Test (CET) or the NEET.

The concern for the students is that the syllabus for the entrance exam of the respective college and NEET 2018 differs. Especially for the Karnataka State students as the CET covers question mostly based on the First and Second PUC syllabi prescribed by the Department of Pre-University Education of Karnataka State, whereas NEET is entirely based on NCERT.

One important point to note is that MP Vyapam has released the exam schedule for all other entrance examination, except for MP PAHUNT. Until last year, MP Professional Examination Board conducted its own entrance exam, MP Pre Ayurved, Homeopathy, Unani, Naturopathy & Yoga Test. So, it can be expected that the admission shall be on the basis of NEET 2018 score.

Also, CBSE does not specify that it conducts NEET UG for AYUSH courses. It is up to the States if they will take up the scores of NEET or will conduct their own entrance exam.