CBSE released NEET 2018 admit card on Tuesday. Candidates under subjudice category have not been issued roll numbers. Their admit cards will be released only after final decision is taken on their candidature. Subjudice means “under judicial consideration and therefore prohibited from public discussion elsewhere”.

In NEET 2018, candidates who were deemed ineligible as per brochure (due to age, open schooling, biology as additional subject) had got interim relief and were allowed to apply for the exam. Now, a final decision will be taken on whether or not they will be deemed eligible to appear for exam. To this effect, a notice has been issued by CBSE stating that such candidates have been put in subjudice category by the honorable High Court. 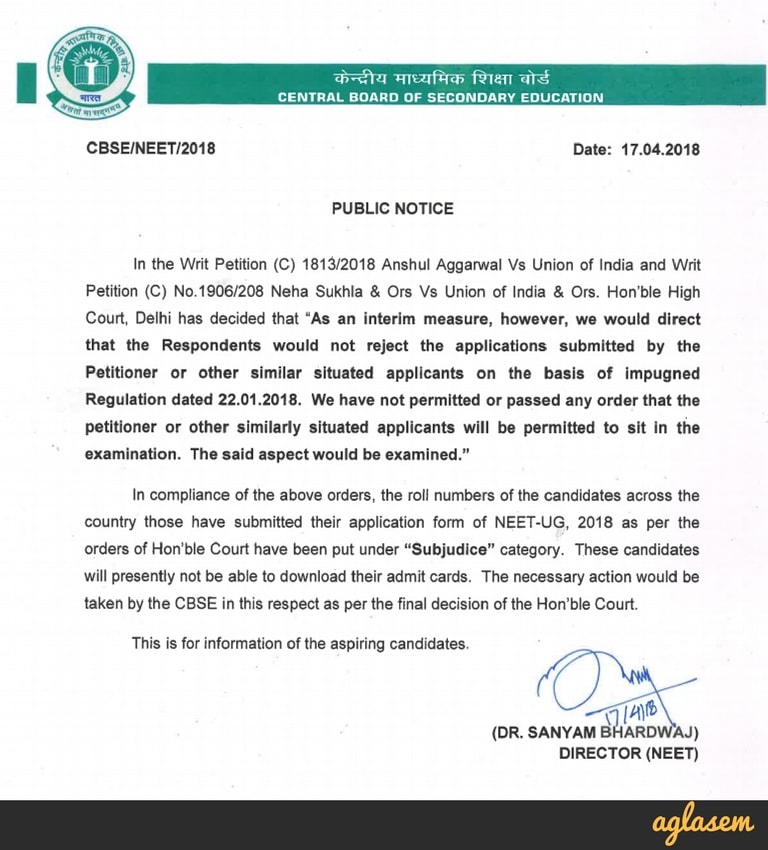 In the Writ Petition (C) 1813/2018 Anshul Aggarwal Vs Union of India and Writ Petition (C) No.1906/208 Neha Sukhla & Ors Vs Union of India & Ors. Hon’ble High Court Delhi has decided that “As an interim measure, however, we would direct that the Respondents would not reject the applications submitted by the Petitioner or other similar situated applicants on the basis of impugned Regulation dated 22.01.2018. We have not permitted or passed any order that the petitioner or other similarly situated applicants will be permitted to sit in the examination. The said aspect would be examined.”

In compliance of the above orders, the roll numbers of the candidates across the country those have submitted their application form of NEET-UG, 2018 as per the orders of Hon‘ble Court have been put under “Subjudice” category. These candidates will presently not be able to download their admit cards. The necessary action would be taken by the CBSE in this respect as per the final decision of the Hon’ble Court.

This is for information of the aspiring candidates.

Candidates are expected to report from 07:30 AM. Last entry in exam hall will be at 09:30 AM. Those in customary dress, that deters from dress code, should arrive by 08:30 AM.

The test will be from 10 AM to 1 PM, being a three hour long paper with sections on physics, chemistry, biology including botany and zoology. The exam is of 10+2 level, comprising of class XI as well as class XII syllabus.

NEET UG is the national level medical entrance exam that determines eligibility and ranking for admission to MBBS and BDS programs throughout India in all MCI and DCI approved institutions, except AIIMS and JIPMER which hold separate exams.

Students from open schools, students with biology as additional subject, and students above age limit, are advised to focus on preparations. Final decision on their eligibility will be out in some time and then they can download admit card as per final decision. Watch out this site for more updates on this matter.