The MBA CET result 2021 is expected to be released today, dated October 20, 2021. Successful candidates stand a chance to get admission in the MBA, PGDM course. 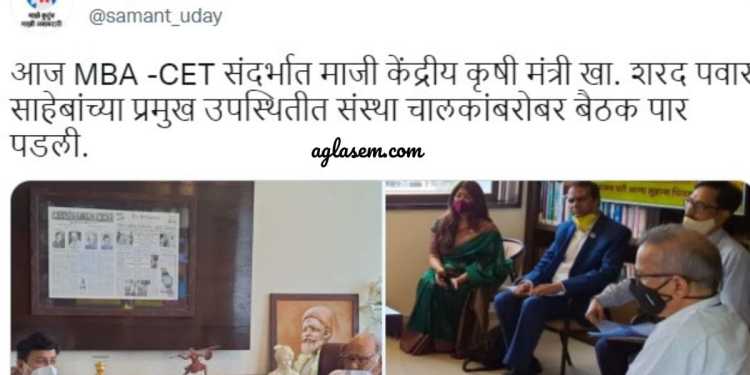 Uday Samant, Minister of Education, Maharashtra this morning, tweeted that a meeting has been held today with former Union Agriculture Minister, Sharad Pawar regarding MBA CET 2021. With this tweet, anticipation is on the rise regarding the release of the MBA CET result 2021 today. The tweet suggests that the meeting between various stakeholders was on the subject of the speedy declaration of the MAH MBA result. An official announcement against it is can be expected any time soon.

A lot of candidates and Youtube educators have given their reactions to the tweet, requesting the minister to release the result of MBA CET today itself. MAH MBA CET exam was held on September 16 and 18, 2021 in multiple shifts. As per the official brochure, the MBA CET result was expected to release on September 28, 2021, but it was delayed. The final result is under preparation, given the fact that the final answer key was released earlier.

A sense of frustration was also witnessed amongst the candidates who sat for the MBA CET 2021 exam. Provided the extraordinary circumstances created under the COVID-19 pandemic, a steep rise in unemployment and subsequent job-hunt amongst the youth has been observed across the country. It is only logical for the youth and aspiring candidates to get annoyed if results keep delaying.

Earlier, a lot of media reports suggested that the MBA CET 2021 result could be out on October 20, 2021. These reports are fueled by the fact that the state cell has also activated the admit card link on the official website, mba2021.mahacet.org. This link was used to download the MBA CET admit card 2021 and checking of results can be done using the same. On clicking the link, a dialogue box pops up that says “scorecard will be released soon”. However, these are mere reports and an official announcement is still awaited from the concerned authorities.

It is advisable that candidates keep a tab on the official website to know the latest updates regarding their results. Once, MBA CET result is released they have to simply use their name or roll number to check the final results. MBA CET 2021 entrance test will be called to appear in the counselling round held by the colleges. However, before that, the candidates have to register themselves for the MAH MBA CET counselling process.

MAH MBA CET 2021 is a state-based MBA entrance test held in Maharashtra by the State Cell Organisation. The candidates willing to take admission in MBA, PGDM courses take up this exam annually. All those who successfully qualify for the exam of MBA CET with minimum cut off marks are called to appear in the Centralized Admission Process (CAP). The registration link for counselling will be activated, once the result is announced. After the document verification round is over, a final merit list is released assigning colleges to candidates on the basis of their ranks, choice of college, and seat availability. Those who are satisfied will the colleges allotted are then called to complete the final admission formalities in the respective colleges.

CAT Admit Card 2021 Release Date is 27 October – What Can Be Release Time?