Many Entrance Exams Clash On May 13; Students Confused On What To Do May 13 – Mark this date as this is the day when 5 engineering entrance exams date clash with each other. Also, Common Law Admission Test (CLAT) falls on this day. If you are an aspirant looking for UG admission in various institutes of the nation, you must be well aware of how the admission process works in most of them. You need to qualify the entrance examination of the institutes to be eligible for admission and this year many such entrance examinations fall on the same date – May 13, 2018, which is a Sunday.

In addition to this, the Presidency University’s Bachelors’ Degree Entrance Test has clashed with the above-mentioned tests.

Many candidates who are preparing for multiple national, state or college level entrance test fret over this clash of dates. Many have to skip one or two entrance tests to be able to appear in the other one. This has led to all sorts of confusion and head-scratching among the candidates and their parents. 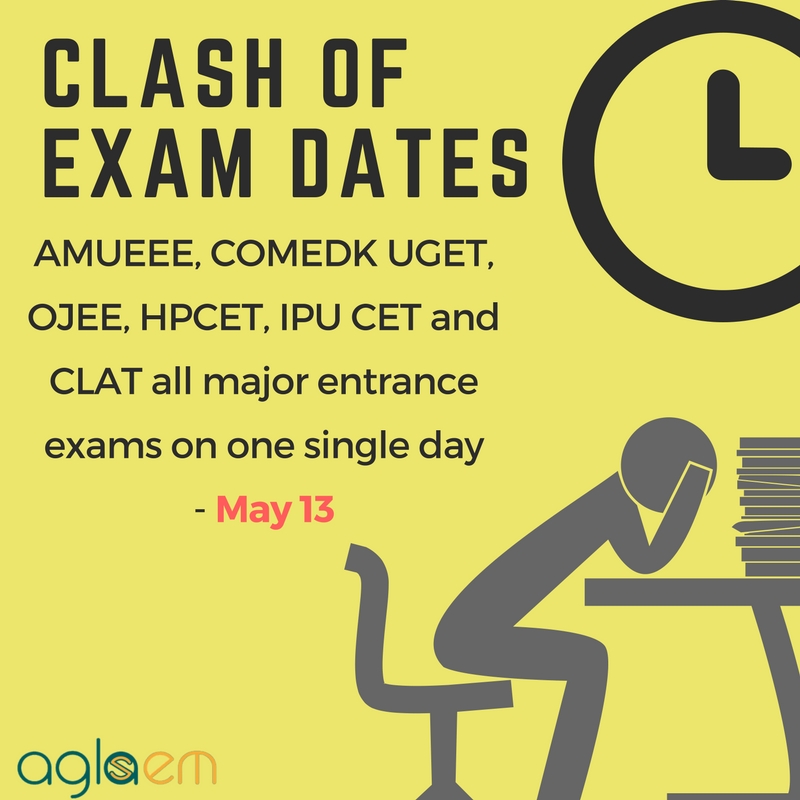 One great concern among the student community over such overlap of exam dates is that they are bound to choose between different exams when ideally they would like to appear in all of them to maximise their chances of selection.

Tirkey, a student of Calcutta Girls’ High School, will now only appear for CLAT. “I have left out Presidency University undergraduate admission exams. In Presidency University, I was initially planning to apply for economics, mathematics and statistics. But considering that all the exam dates are clashing with each other, I am only preparing for CLAT now. I had taken preparations for the law entrance test throughout the year,” she said.

There are also concerns that why the examination conducting bodies did not take a note of this clash? Was it a pure coincidence or a decision taken knowingly?

It is obvious that the candidates will fret over this clash as they had been planning their higher studies since long. Coachings and Training have been a part of their preparations since class 11 and much before for many. Thus, the clash of dates of many entrance examination has lead to confusions and breakdowns among the students.

Regarding this clash of dates Times of India has also represented their concerns by saying: “Exam calendars here should be drawn up keeping in mind the pan-India exam schedule. It is obvious that students suffer in such cases; they miss out on trying for more institutes and subjects of choice. But institutes, too, stand the risk of losing talent. It is a lose-lose situation for both students and institutes.”

Are one of the many candidates who is facing the same situation? What do you think can solve such problems. You can drop in your views in the comment section below.

SRMJEEE 2018 Result has been announced at srmuniv.ac.in

AP EAMCET 2018 Result Preponed; Results to be now Announced on May 02