IGNOU has clarified that the University Grants Commision (UGC) grants recognition to only programmes being offered at the undergraduate and postgraduate levels. This clarification has come in regards to the newspaper reports that have claimed that several open courses have been derecognised by the UGC.

IGNOU clarified the confusion stating that “University Grants Commission gives recognition only for the programmes at Undergraduate and Post-graduate level as per sub-regulation (2) of Regulation 1 of Part I of the UGC (ODL) Regulations, 2017.” IGNOU has also clarified officially that all the Certificate and Diploma Programmes offered by Indira Gandhi National Open University (IGNOU) under ODL mode are valid and continue to remain on offer.

In addition to that, the professional programmes at IGNOU like B.Ed, Post-Basic B.Sc. Nursing, Master of Business Administration, Master of Computer Applications have been recognised by the respective Regulatory Bodies and the relevant documents have been submitted to UGC for consideration.

On August 12, 2018, that is on the same day as that of the publication of the newspaper article, the University Grants Commission (UGC) has also made it clear via a public announcement that no such derecognition has been done by them. The public notice has clearly mentioned that:

It is clarified that process of recognition of Distance Education programmes of universities submitted applications for recognition for the year 2018-19 and onwards is still on, and so far no open course of applicant universities has been derecognised.

The public notice is given below: 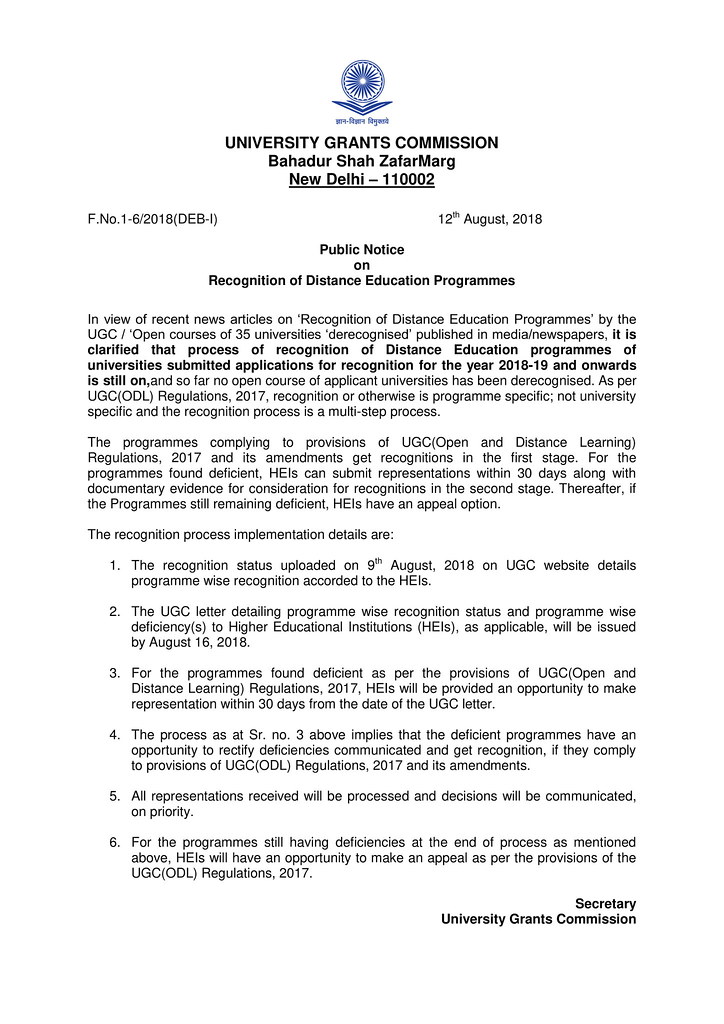 The articles published in the newspaper mentioned that UGC has released the list of recognised courses offered at the Universities offering the distance learning courses. IGNOU was also mentioned in the list and as per the report, only 42 courses of IGNOU was recognized by University Grants Commision (UGC).

Thus, in addition to all the 42 UG, PG courses of IGNOU recognised by the UGC, all their other courses are as valid as before and are on offer.

However, the fact is –  On August 09, Distance Education Bureau of UGC had released the list of approved courses after the reevaluation of the courses offered by the universities. As per the list, 42 UG and PG Courses of IGNOU has been recognised by UGC. The other programmes of the university like the Certificate and Diploma Programmes are valid and IGNOU is free to offer these programmes under ODL mode after the approval of the statutory bodies.

IGNOU was established by an Act of Parliament in 1985. The University offers high-quality teaching through the Open and Distance Learning (ODL) mode. The University has a network 67 Regional Centre, around 2,667 learner support centres and 29 overseas partner institutions. IGNOU offers about 228 diploma, certificate, degree and doctoral programmes, with a strength of nearly 574 academic staff and 810 faculty members.