Home » University & Colleges » DU Cut Off 2018: Admission Process Ahead & What to Expect of DU Second Cut Off

DU Cut Off 2018: Admission Process Ahead & What to Expect of DU Second Cut Off The University of Delhi (DU) has released the first cut off list for all the colleges affiliated to it. The DU First Cut Off has been announced online, on du.ac.in and for most of the colleges, the cut off score has increased by a percentage or so, in comparison to last year.

Though St. Stephen’s was the first institute that announced cut off score but Lady Shri Ram College (LSR) stood out with the highest cutoff of 98.75% for B.A. Programm. For the same, last year’s cutoff score was only 95.5% and the highest was for B.A. (Hons) Psychology at 98.25%.

Some of the most preferred colleges under Delhi University like SRCC, Hindu, Hansraj, etc has also increased the cut off. The increase in the cutoff is not more than one percent but the impact of this shall be evident for the students.

The difference in the cut off score of top colleges. 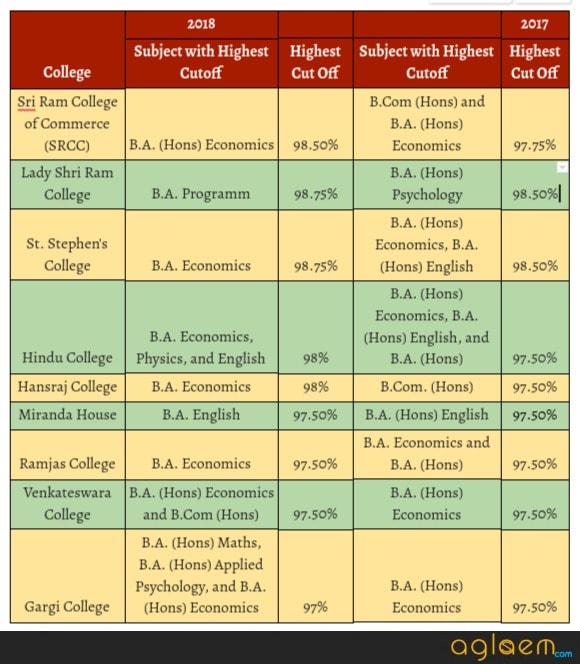 Despite the spiking number, the cutoff has not crossed 99% like last year. SGTB Khalsa College astonished the nation when it announced B.Sc. (Hons) Electronics and B.A. (Hons) Political Science cutoff above 99%. This year, the institute has settled for 98% as the heights cut off score.

Cleared DU First Cut Off 2018? This is What You Need to Do Next

Along with these, the candidates will also have to submit at least two passport size photographs. It is important to note that the certificates are to be carried in original and as a photocopy. The photocopies should be self-attested. When the certificates will be approved by the principal, candidates will be able to see fee payment option in the dashboard of candidate login. Candidates must finish the admission formalities before June 21, 2018.

In case, candidates want to cancel admission and apply again for another college then they may do so, from the login by paying certain fee amount. To take the admission in new college, candidates will have to repeat the same process.