Delhi High court upholds the compulsion of qualifying NEET to study medicine abroad. An amendment was made in Foreign Medical Institution Regulations, 2002 and Screening Test Regulations, 2002 this year in February. As per the amendment, NEET was made compulsory for even those candidates who wished to study medicine abroad from 2018 onward. However, many candidates were unaware of this fact and took this matter in the court.

Thus, as per the Delhi HC decision, only those candidates who did not appear in NEET or did not qualify it on the grounds that they were either not aware of the amendment or could not fill the NEET form due to short notice would be issued eligibility certificates to pursue medicine abroad as an one-time exception.

But Delhi HC on the other hand, has clearly disregarded the petition of the candidates to reverse the amendments in Foreign Medical Institution Regulations, 2002 and Screening Test Regulations, 2002. NEET thus remains compulsory to study medicine in any foreign land.

Thus, the petitioners who took up the case in high court against Medical Council of India (MCI) along with all those who did not appear or qualify NEET this year, are given an one time relief and can acquire their eligibility certificate from MCI to pursue medicine abroad, but the amendments are not rolled back

HC had directed MCI to issue eligibility certificate to such candidates as a one-time measure only. As per the reports, the court has quoted the following:

“Once the regulations required that candidates who were to proceed abroad after 31st May, 2018 had to qualify in NEET, to secure an eligibility certificate (i.e. after the first clarification, having regard to the terms of the eligibility regulations) a further division of those who did not appear (on the assumption that all of them could not appear because they were unaware) and those who appeared, but could not clear in the examination, was not justified.”

On the matter regarding those who appeared in NEET but did not qualify it and those who did not appear in NEET at all, how this decision of one time exemption remains fair, the court has quoted the following:

“In these circumstances, as between those who chose not to appear in NEET and those who did (but could not qualify) the latter category did abide by the regulations. That has now become a millstone around their neck; their inability to qualify in the NEET (because of the shortage of time available) resulted in their inability to clear the test. On the other hand, all those who stood outside the process (regardless of whether they were aware or not aware) have benefitted from their failure and omission to adhere to the law. This, in the opinion of the court, has resulted in unfairness upon the petitioners and those like them who at least abided by the rules and regulations.”

Thus, the rule remain candidates who wish to study medicine abroad gave to qualify NEET and acquire the eligibility certificate from MCI. After they complete their course abroad  and return to practice in India they have to pass the screening test called the Foreign Medical Graduates Exam (FMGE).

While upholding the compulsion of qualifying NEET to study medicine abroad, and giving decision against the petitioner HC took into regard the “the quality of professionals” the primary objective of Indian Medical Council Act, 1956.

It also regarded the fact that not every candidates get to enroll themselves in the foreign universities because of skills, proficiency, merit or aptitude but rather because of other reasons like the monetary aspects.

Thus the decision favoring MCI and keeping NEET compulsory for medical studies outside the nation was made by Delhi High Court. The petitioners who lost the case against MCI are  Shahul Hameed KS and Parul Bhatnagar.

Thus candidates planning to study medicine out of India in 2019, must qualify the NEET 2019 exam. And similarly the amendments in Foreign Medical Institution Regulations, 2002 and Screening Test Regulations, 2002, making NEET compulsory, will stay valid in the future until any further changes. 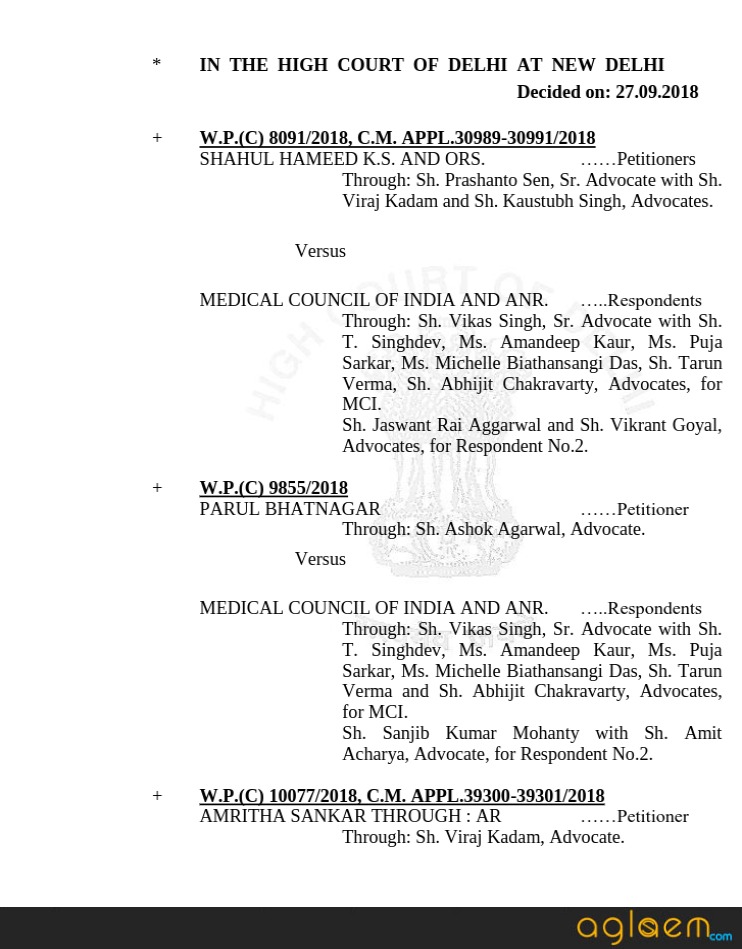 What do you think of the Delhi HC’s verdict? Let us know your opinion in the comment section below. For more updates stay in AglaSem news!