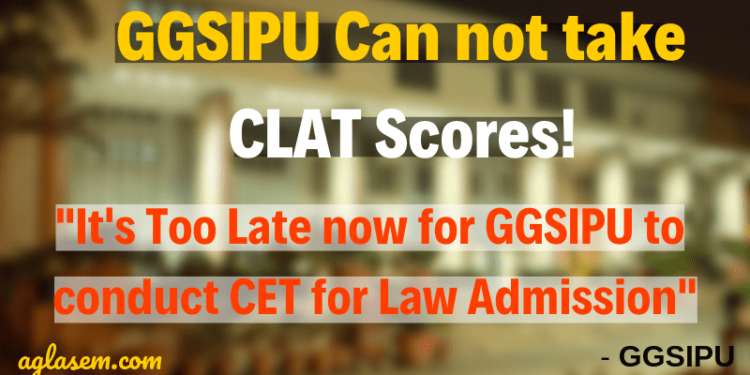 The petitioners are 12 private law colleges offering admission to LL.B programme and are affiliated to IP University. The petitioners are against the order of Directorate of Higher Education (DHE) and a circular issued by GGSIPU for taking law admission through CLAT. IP University was all set to take admission in the undergraduate and postgraduate law courses. However, now the law aspirants are left in confusion as would it be CLAT 2019 or IPU CET for law admission 2019 in GGSIPU.

On the basis of the order of DHE Delhi and update by GGSIPU, many candidates must have already filled the CLAT 2019 Application form. Not to forget the price of CLAT application form, it was argued by the petitioner that the decision was taken against the provisions of Delhi Professional Colleges or Institutions. Therefore, GGSIPU cannot take admission on the basis of CLAT scores in the affiliated colleges offering law admission.

It was argued by the petitioners that the Common entrance test has to be conducted by a designated-agency and no provision in the act permits taking admission in law courses on the basis of score of another agency. It was further contended that a CET has to be taken by the GGSIPU only. And as in the past, the counselling process will also be conducted by GGSIUP itself.

GGSIPU contended that there has been no violation of provisions of 2007; further stating that the act does not require the counseling to be conducted by the agency conducting CET. However, it was heavier on the side of the petitioners as the decision of the Delhi High court did not support GGSIPUP for taking law admission through CLAT.

It was yet to happen that the GGSIPU was to join hands with the consortium of NLU’s and sign a memorandum of understanding for taking admission in law courses on the basis of CLAT scores. However, the ‘decision’ of GGSIPU has been given a red flag by the Delhi high court. As per the decision of the Delhi HC, it was clarified that there is no provision in the act which requires an institution affecting admission through a CET to be the only agency which conducts the said test. However, it was observed that no notification has been issued designating the CLAT conducting agency for being the agency to affect admission in GGSIPU.

It was concluded that the decision of GGSIPU to take law admission on the basis of CLAT Scores is contrary to the provisions in the 2007 act. GGSIPU had lastly argued that it was too late for IPU ton conduct a CET for admission to the LLB programme. The same, however, was also rejected and disagreed upon by the Delhi high court.

Let us know what do you feel in the comment section below!