Home » Entrance Exams » CLAT 2019 Dates Confirmed; Exam to be Conducted on 12 May

CLAT 2019 Dates Confirmed; Exam to be Conducted on 12 May The Common Law Admission Test i.e CLAT 2019 exam dates have been announced through an official press release dated October 04, 2018 by the National Law University, Odisha (NLUO). The exam will be conducted on May 12, 2019. The rumors have turned out to be true as the CLAT 2019 exam is going to be conducted by the National Law University, Odisha. The NLU had recently uploaded an official notification on its website declaring to conduct the CLAT exam. The CLAT exam 2019 will be conducted on Sunday, May 12, 2019, at 03:00 PM. 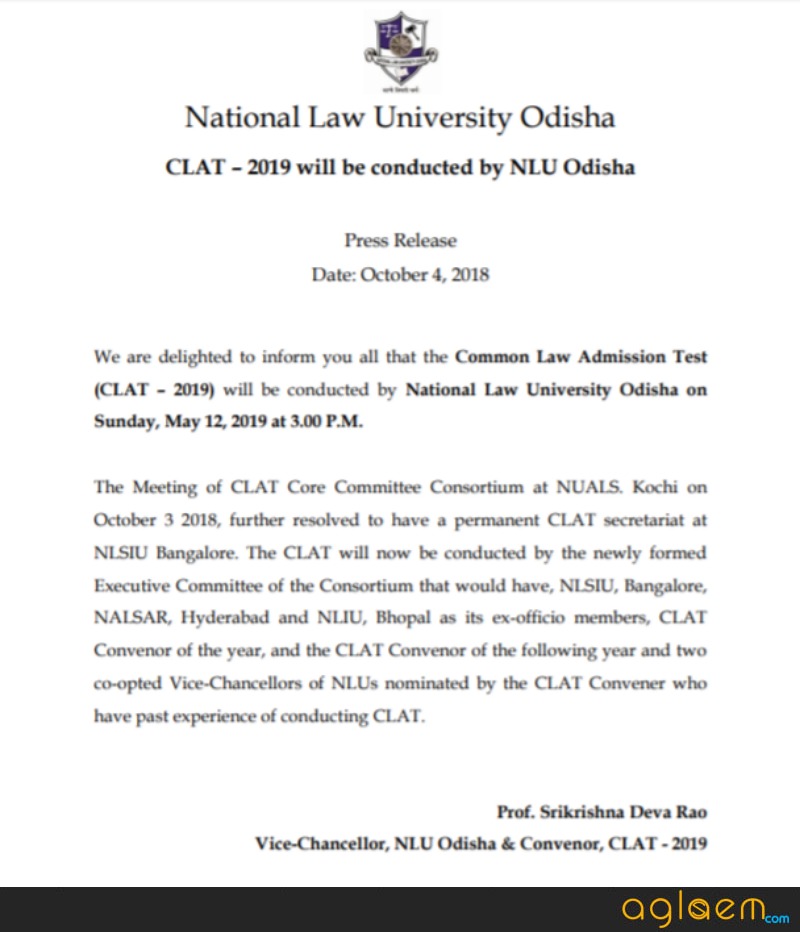 The recently formed executive committee of the Consortium is going to conduct the exam with NLSIU Bangalore, Hyderabad, NALSAR and NLIU, Bhopal being the ex-officio members. These respective members will join along with CLAT Convenor of the present and the following year and also two co-opted Vice-Chancellors of NLU’s that are nominated by the CLAT convenor.

The CLAT 2019 Exam date and the conducting body have been the matter of discussion since a long time and finally, as the exam date and time has been announced, many law aspirants have started CLAT 2019 preparation.

It is necessary for the Law aspirants to appear for the Common Law Admission Test if they are aiming to take admission in any of the National Law Universities; except for NLU Delhi, which conducts its own admission test. If not NLU’s, studnets can get admission to 43 other law institutions on the basis of their CLAT score.

For the CLAT 2019, students have crossed fingers for two reasons. First, to easily get through the exam and second for the proper conduct of the CLAT exam. Last year, the students faced some uninvited technical glitches, because of which, the students had to move the HC against negligence and misconduct by the NUALS, Kochi. Students are really hoping that NLU, Odisha understands the responsibility it has been given.

Let’s wait and see the number of candidates who appear for the CLAT 2019 exam. In the previous year, about 63000 students had appeared in the CLAT exam for 21000 seats.