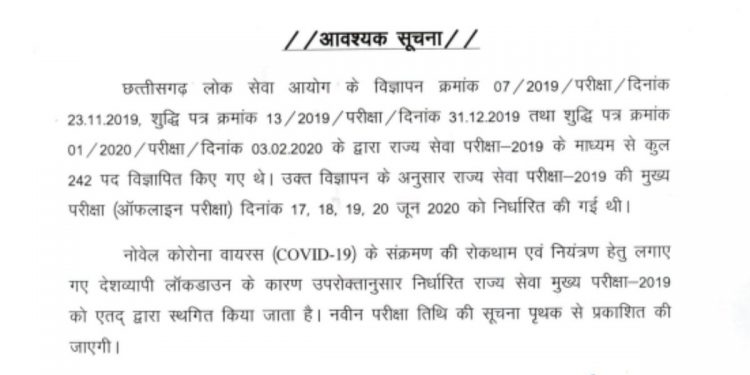 Chhattisgarh Public Service Commission has postponed the State Service Examination scheduled to be conducted in the month of June 2020. A public notice released earlier at the official CGPSC website, indicated that the main stage exam of the CGPSC State Service recruitment exam is postponed until fresh dates are decided. The Commission has cited the countrywide lockdown imposed by the government as the only cause of postponing the exam. The exam is being conducted for recruitment into 242 State Service posts of the Government. The official postponement notice can be downloaded from the website psc.cg.gov.in. Check out the screenshot of the official notice below.

The CGPSC State Service recruitment examination is conducted for the recruitment of graduate candidates. A three-stage selection procedure is adopted by the Commission for the selection and appointment of eligible candidates to various vacant positions in various state government departments. The first two stages comprise combined competitive exams where the first exam is known as the Prelims and the second stage exam is known as the Mains. Earlier, CGPSC conducted the first stage Prelims exam on February 09, 2020. Those who qualified through the Prelims became eligible to appear in the next stage i.e. the Mains exam. The Mains of the CGPSC State Service Examination 2020 was scheduled to be held this June on and from 17 to 20. However, the Commission has now decided that the exam can only be staged later. Until then, the State Service Examination 2020 remains postponed.

CGPSC announced the decision of postponement through an official notice numbered 356/28/Exam/2019 dated 21.05.2020 that was published this week on the CGPSC website. It clearly cited the government issued lockdown in the country to be the reason for driving this decision. The Commission has added in the public notice that it will release fresh dates to conduct the exam. However, CGPSC has not indicated when the new dates might be announced. However, it is expected that as soon as the current situations are normalized, the Commission might come up with new dates to conduct the exam.

The postponement of the CGPSC State Service 2020 exam is preceded by numerous other government exams that were canceled or postponed after the imposition of the countrywide lockdown to contain the outbreak of Novel Coronavirus. After three strict phases of complete lockdown in the country, the government has allowed certain relaxations in the fourth phase of the lockdown so that regular economic operations can be resumed. However, as of now, the exam stands postponed until further notice by the Commission.

Big Day for UPSC Aspirants, Fresh Dates of IAS Prelims 2020 Likely to be Out on 20th May