National Institute of Technology Jamshedpur (NIT JSR) has released the CCMT 2018 schedule. According to the schedule, an advertisement for CCMT 2018 will publicly release on March 26. The official website will also launch on the same date.

Graduate Aptitude Test in Engineering was held on February 3, 4, 10, 11. IIT Guwahati has already released GATE answer keys. Now GATE 2018 Result will be announced on March 17. Just a week after that, CCMT will start.

Registration for counselling shall start on April 3. Candidates with valid GATE scores will be able to register to participate in the counselling process. CCMT Registration will close on May 8. A comfortably long time window has been provided for eligible aspirants to apply. 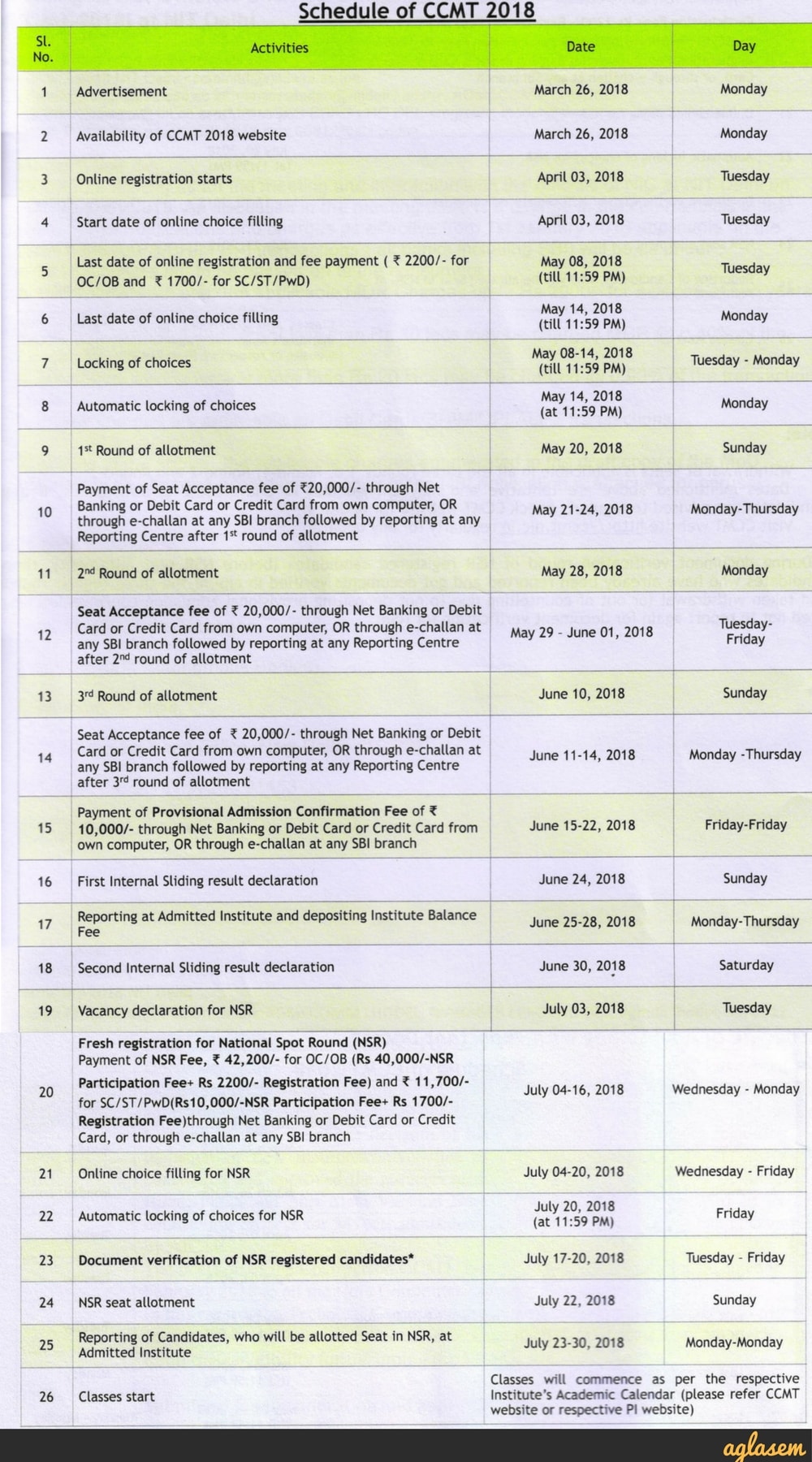 Candidates can also start entering choices from April 3, and continue to do so until May 14. Choice filling refers to the process in which a candidate selects which college and which branch/specialization he/she wants to pursue in the participating institutes. From May 8 to 14, one can lock choices, and on its last date, choices will be automatically locked.

The first seat allotment result of CCMT 2018 will be announced on May 20. Those who get a seat will be able to pay seat acceptance fee of Rs 20,000 and report to any reporting centre.

Then the second seat allotment result will be announced on May 28. This will be followed by third round result on June 10. There will only be three rounds of seat allotment.

Vacancy declaration for NSR (National Sport Round) will be on July 3. Then candidates can fill choices for NSR. NSR seat allotment in CCMT 2018 will happen on July 22.

Classes will commence as per the respective institute’s academic calendar.

Withdrawal of seats will be applicable in all three rounds.

During document verification round of NSR registered candidates (before NSR seat allotment), those candidates who have already been reported and got documents verified in any one the three regular rounds and taken withdrawal (or out of counselling due to not depositing provisional admission confirmation fee), need not report again for document verification of NSR.

The official website for CCMT 2018 shall be ccmt.nic.in. Right now the URL is displaying details of past year’s counselling. As per notice, the website will be launched with new details on March 26.

The information brochure will become available either on that day, or when registration starts.

Candidates must take note of the special eligibility conditions imposed by the institutes individually. It is important to ensure that one fulfills all eligibility criteria before finalizing college and specialization.

The number of participating institutes in CCMT is likely to be around 40.