DILR section is often tricky and the questions are very different across the slots of the exam. The difficulty level of this section also remains on the higher side, however, here are some last minute tips that can help the aspirants of CAT 2020 a lot in this section. 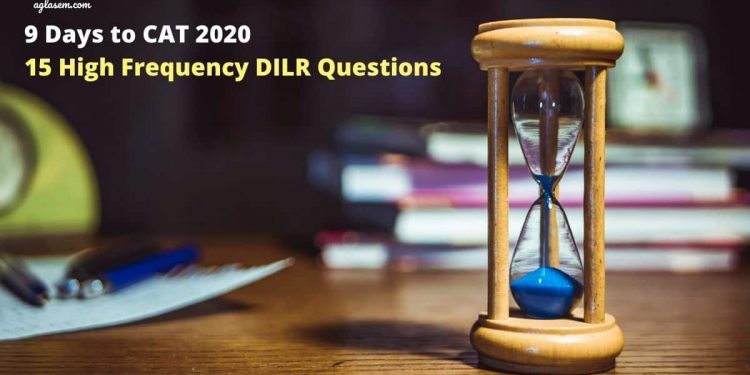 Common Admission Test (CAT) 2020 is on November 29, 2020, which means the candidates only have 9 days left to polish their skills and prepare for the exam. DILR section in CAT is one of the most tricky sections. This is because it requires interpretation, logic, and quick thinking. The students must note that DILR is usually the decider section and the toughness level of the section has been gradually increasing over the years. However, the aspirants can crack this section with dedicated practice and a good time management strategy. To be able to cope with the last-minute revision of the Data Interpretation and Logical Reasoning section, here are some tips that are effective and easy to follow.

Focus on practicing as much as you can: The questions in DILR are based on data in tables, charts, graphs, diagrams, case studies, logical games, calendars, clocks, cubes, seating arrangements, blood relations, etc. Hence to be able to solve these questions on time and accurately, candidates have to practice as many questions as possible in the last few days. Mock test and previous year paper are the best resource to do so.

Practice time management: This year the candidates shall get 40 mins per section. Hence the candidates have to ensure that they are not spending a lot of time in one particular questions, but their time is equally divided among all the 3 sections. The best is to practice the DILR questions in a manner that all the questions are completed within 40 mins and with 100% accuracy.

Do not start any new topic in DILR now: Suppose a candidate has not yet practice the pie chart type question, then it is advised to just have a look at those type of questions. Do not start the topic from the scratch as this will only lead to confusion in concepts. Since CAT has negative marking, it is always better to focus on the strengths and get as many correct answers as possible.

Question selection: In the last week is for strategising, the candidates must figure out what type of questions they are most comfortable to solve. These questions must be solved first on the exam day. This will enable the candidates to stay high on confidence while solving the problems and will save time as well.

Accuracy is important: The candidates have to focus on getting a question accurate in one go. The level of practice must be such that the candidates can solve the question and get the correct answer in one go.

Practice to scan the questions: Most of the answers in the DILR section is hidden in the question itself. Hence, candidates need a sharp eye, out of box thinking, and ability to read between the lines. This can come from regular practice, try to understand the questions and read it more than once.

To get an idea on what type of questions come in DILR, here are 15 questions that were asked in CAT exam in the previous years:

Q: During which quarter was the percentage decrease in sales from the previous quater’s sales the highest?

Question 2. 1600 satellites were sent up by a country for several purposes. The purposes are classifieds as broadcasting (B), communication (C), surveillance (S), and others (O). A satellite can serve multiple purposes; however a satellite serving either B, or C, or S does not serve O.The following facts are known about the satellites:

Q: What best can be said about the number of satellites serving C?

Q: Based on the given information, which of the following statements MUST be FALSE?

Ques 4: A company administers a written test comprising of three sections of 20 marks each – Data Interpretation (DI), Written English (WE), and General Awareness (GA), for recruitment. The composite score for a candidate (out of 80) is calculated by doubling her marks in DI and adding it to the sum of her marks in the other two sections. Candidates who score less than70% marks in two or more sections are disqualified. From among the rest, the four with the highest composite scores are recruited. If four or fewer candidates qualify, all who qualify are recruited. Ten candidates appeared for the written test. Their marks in the test are given in the table below. Some marks in the table are missing, but the following facts are known:

1. No two candidates had the same composite score.
2. Ajay was the unique highest scorer in WE.
3. Among the four recruited, Geeta had the lowest composite score.
4. Indu was recruited.
5. Danish, Harini, and Indu had scored the same marks in GA.
6. Indu and Jatin both scored 100% in exactly one section and Jatin’s composite score was 10more than Indu’s.

Q: Which of the following statements MUST be FALSE?

Ques 5: Seven candidates, Akil, Balaram, Chitra, Divya, Erina, Fatima, and Ganeshan, were invited to interview for a position. Candidates were required to reach the venue before 8 am.Immediately upon arrival, they were sent to one of three interview rooms: 101, 102, and 103. The following venue log shows the arrival times for these candidates. Some of the names have not been recorded in the log and have been marked as ‘?’.

Additionally here are some statements from the candidates:

Q: What best can be said about the room to which Divya was allotted?

This coding scheme has the following rules:

1. The scheme is case-insensitive (does not distinguish between upper case and lower caseletters).
2. Each letter has a unique code which is a single digit from among 1,2,3, …, 9.
3. The digit 9 codes two letters, and every other digit codes three letters.
4. The code for a word is constructed by arranging the digits corresponding to its letters in a non-decreasing sequence

Answer these questions on the basis of this information:

Q: What best can be concluded about the code for the letter L?

Ques 8: The following table represents addition of two six-digit numbers given in the first and the second rows, while the sum is given in the third row. In the representation, each of the digits 0, 1, 2, 3, 4, 5, 6, 7, 8, 9 has been coded with one letter among A, B, C, D, E, F, G,H, J, K, with distinct letters representing distinct digits.

Q: Which digit does the letter A represent? (TITA question)

Q: What is the maximum possible number of different types of items?

Q: On which aspect is the median score of the five vendors the least?

Q: Who is standing at the intersection a?