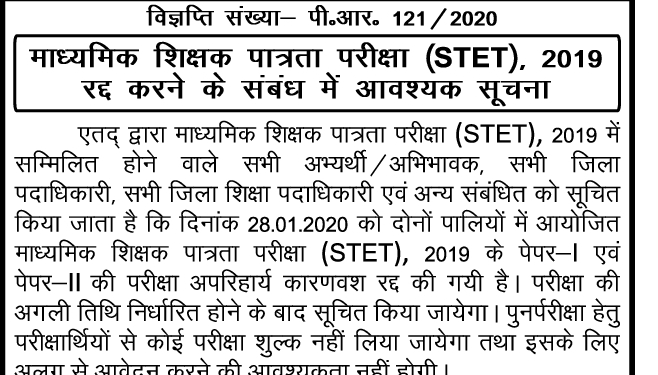 The BSTET 2019 exam, which was held on January 28, 2020, has been canceled by the Board of School Education, Bihar (BSEB). A special committee probing into matters called for a need to re-conduct the exam. Incidentally, the committee was formed in urgency to look after matters following widespread violence and ruckus at multiple exam centers on the exam day. BSEB has publicized the key outcomes of the probe in the report indicating that a re-exam would be conducted at a later date as decided in due time by the Commission. Candidates have however expressed dissent over the decision and threatened of staging mass protests.

The BSEB conducted the BSTET 2019 exam after eight long years on January 28, 2020, at various centers located throughout all major cities of Bihar. However, the exam could not be conducted systematically at multiple centers due to several counts of unsolicited activities by some groups of candidates. The report presented by the special probing committee identified all such events at specific centers and called for an immediate need to cancel the exam for both stages and conduct a re-exam.

As per the findings of the probing committee, there have been multiple counts of unsolicited incidents that have jeopardized the fairness of the exam. Candidates reportedly tore down question papers, transmitted information using smartphones, destroyed infrastructure, and even responded with violence by attacking the officials appointed by the Board to conduct the exam. The probing Committee’s report especially highlighted such events to have taken place in centers situated in Gaya, Muzaffarpur, Gopalganj, and Patna.

Candidates, however, expressed widespread dissent over the decision to cancel the exam citing the Board’s fault in setting the question paper for the first part. The probing Committee’s report has accepted that the Board has indeed made a mistake in framing the question paper of social science. The question paper was supposed to be divided into four sections namely History, Geography, Political Science, and Economics. Among these, candidates had to select and pass in any two, one of which must have been either history or geography and any other one. Although the paper was set from all the four subjects, there was no segregation in sections as indicated earlier through the website.

The decision of the Board of School Education, Bihar is now official through press releases at the website bsebstet2019.in. However, how the aftermaths may turn out still remains uncertain over the sheer disagreement expressed by candidates. Disregarding the justifications provided by the Board with respect to the cancelation of the exam, the association of BSTET applicants has threatened mass protests and even suicidal measures if the Board does not reciprocate in a desirable manner.

Big Day for UPSC Aspirants, Fresh Dates of IAS Prelims 2020 Likely to be Out on 20th May