Home » BSTC 2019 to be held by Rajasthan Council of Secondary Education, Bikaner

BSTC 2019 to be held by Rajasthan Council of Secondary Education, Bikaner Last year the BSTC Examination was conducted by Banswara University. It is a big step taken by the Government of Rajasthan to hand over the responsibilities of BSTC examination from Universities of Ajmer to the Education Council.

The University administration was working as a nodal agency for BSTC examination from many years, the reason for not giving BSTC to the universities of Ajmer this year as per the sources is majorly due to the Rhetoric between Ajmer’s MDS University and the Government College Ajmer. Even after claims made by Universities of Ajmer, the Government handed over the BSTC examination to Rajasthan Council of Secondary Education, Bikaner. 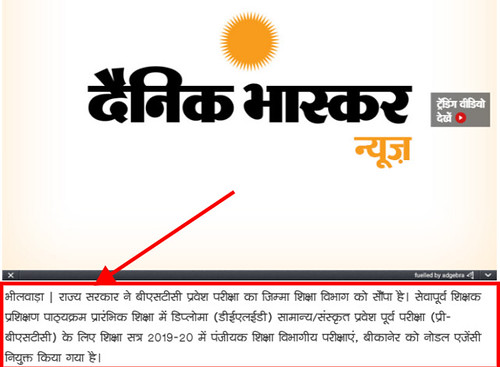 Also, the Pre-Teacher Education Test (PTET) which was formerly conducted by MDS University, Ajmer was later handed over to Dungar College, Bikaner.

BSTC or the Basic School Teachers Certificate Course is for candidates who wish to take up basic school teaching courses offered by the various institutes and colleges of Rajasthan. Candiadtes with a state domicile of Rajasthan who are not above 28 years of age and has completed their class 12th examination with a minimum 50% (45% in case of SC/ ST category) can apply for BSTC 2019.

Online application form for BSTC will be available for both BSTC (General) and BSTC (Sanskrit) on the official website rajrmsa.nic.in. Candidate will have to fill the BSTC application form and also upload a scanned photograph and signature in the form. The application fee to be paid is Rs.400 for one course that is either BSTC General or Sanskrit and Rs.450 for both the courses.

The question paper for BSTC last year was divided into 4 sections with a total of 200 Multiple choice questions from Mental Ability, General information of Rajasthan, Teaching Aptitude and English
Hindi OR Sanskrit. There was no negative marking for any incorrect answer marked by a candidate.

EWS Reservation In UPSC Civil Services 2019; Know These 5 Things Before Applying At upsconline.nic.in

EWS Reservation In UPSC Civil Services 2019; Know These 5 Things Before Applying At upsconline.nic.in