As per the reports, the dates were preponed to May 02, 2018 from May 05, 2018. Thus, it was released today afternoon as expected. Ganta Srinivasa Rao, the Andhra Pradesh Human Resources Development (HRD) minister, announced the AP EAMCET 2018 Results at 12 noon in Vijayawada on Wednesday, May 2, 2018. 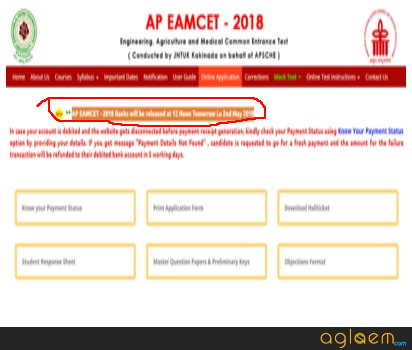 Candidates can now check their results online by entering their roll number. Keep handy your admit card of AP EAMCET 2018 to check the result online at www.sche.ap.gov.in.

AP EAMCET examination a pre-requisite entrance exam for admission into various professional courses offered in the Universities or Private Colleges in the State of Andhra Pradesh. qualifying this examination will lead the candidates to take admission into their desired colleges as per their scores in the examination.

The AP EAMCET Entrance exam for various courses such as – Engineering and Agriculture – were held in the month of April 2018. The response sheet and preliminary answer keys of the AP EAMCET 2018 examination were released on April 25, 2018.

AP EAMCET 2018 Result Preponed; Results to be now Announced on May 02