The overall cut-off for students who will become eligible for JEE-Advanced has gone down further this year. As per Central Board of Secondary Education (CBSE), which announced the results for JEE Main 2018 on Monday, the cut-off in common rank is 74 as compared to 81 in 2017 and 100 in 2016.

The cutoff was expected to go low. All categories i.e. SC, ST, PWD and others have witnessed a drop in cut-offs when compared to the last few years. This was as per the analysis by various institutes and experts. Many students had complained about the level of difficulty and the length of the paper. Many students could not complete the full exam. Thus, scores and also the JEE Main 2018 Cutoffs were bound to be low this year. 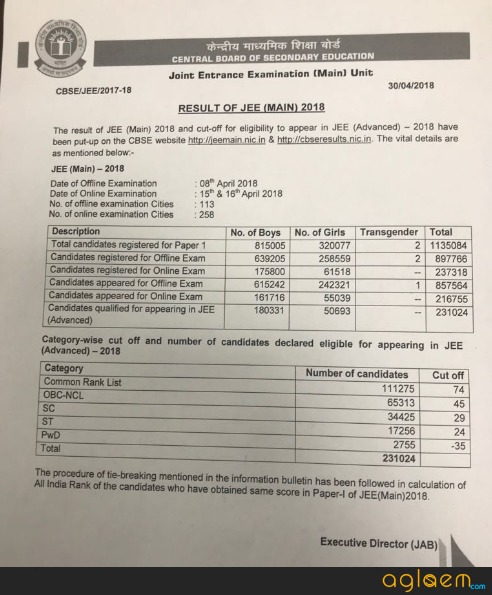 Why is the drop so steep year by year?

“This year, it was decided that an additional 4,000 students would be selected for the Advanced stage. Since the difficulty level of the paper was increased, the board had no choice but to reduce the cut-off score to achieve the desired figures,” said Venkat Ramana, IIT exam head at Triumphant Institute of Management Education, Hyderabad.

Is this a wise decision?

Reason 1: Educationalists believe that the decision to increase the number of candidates for JEE Advanced has to do with the increase in the number of total seats across the IITs.

Reason 2: While the increase in the number of seats can be a reason, some experts say that ample amount of students who clear the Advanced exam ultimately drop out — thus leaving several seats vacant. To avoid that and give other candidates a fair chance, the board had made this move.

In comparison to last year when 1,09,585 candidates from across the country (in general category) qualified for the Advanced exam, this year the number is a high 1,11,275 — a rise of 1,690 candidates. The overall number of candidates qualifying for JEE Advanced also increased to 2,31,024 this year from 2,21,427 last year.

The cutoff has seen a major setback if compared to all the previous years’ cutoff. From 115 in 2014 to 74 this year.

While the scores have invited mixed reactions from students and experts, most top scorers seemed happy with their marks this year. In a newspaper interview, Tathaghat Verma revealed that he was happy to score as per expectations. He further said, “What I did not expect was to be amongst the top scorers, so that’s a pleasant surprise.” He has scored 331 out of 360. Like many other top scorers, Verma also hopes to clear JEE-Advanced and secure a seat in computer science faculty at Indian Institute of Technology Bombay (IIT-B).

Did you expect the cutoff to go so low this year? What do you think is the reason for such relaxed cutoff marks? Comment below and let us know.

DILR Is Always Toughest Section in CAT Exam: This Is How You Can Tackle It