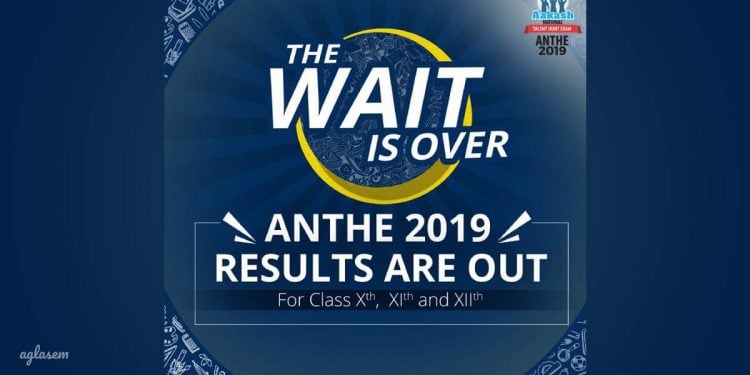 Aakash Educational Services Limited (AESL) has announced ANTHE result 2019 for class 10th, 11th, 12th students. Students of class 8th and 9th who appeared in the exam can check their results on November 8, 2019. As far as the timings for the results that remain are concerned, either exact time will be made known on the same day in the morning, or Aakash will directly declare results anytime in the evening.

The result for Aakash National Talent Hunt Exam (ANTHE) is released by Aakash at its official website. ANTHE 2019 result was announced at 5 PM. The test – takers can check their respective results at aakash.ac.in. The exam took place on October 13 & 20, 2019. For checking ANTHE 2019 Result, the students will be in need of their application number and date of birth.

ANTHE is conducted to determine the knowledge and concept understanding of the students studying in the class 8th-12th. ANTHE was conducted in two modes (online and offline).

The main purpose of ANTHE is to provide the scholarship to candidates upto 100%. Also, by giving this exam, the students can get to know their actual level of basic understanding and concepts at the school level.

As the exam is conducted at the national level, so the exam conducting body decided to conduct the exam on two dates. The first exam (October 13) was for the students who opted the test centres as Maharashtra, Haryana and Goa. On the other day (October 19), the exam was conducted for the rest of India. The result, however, is announced altogether.

The ultimate goal of Aakash Talent Hunt Exam is to provide the cash awards, to allow the students to know their full potential. Also, the students once enrolled can practice the daily tests set by the institute.

ANTHE is known nation-wide and being a popular exam, around 4.96 lakhs students appeared for it. There were approximately 2411 test centres all over India.

The reason of this exam being so popular is because in India, there are two streams namely Medical and Engineering in which majority of students get enrol to become successful doctors and engineers.

Aakash Institute put its best foot forward to bring these meritorious students to come on the forefront and this is the sole reason to conduct Aakash National Talent Hunt Examination (ANTHE). The past years have shown that there are no proper and enough aids or resources for the students who want to appear in the competitive exams. For the same reason, ANTHE is conducted so the students get an edge to succeed.

ANTHE provides opportunity to practice the mock tests for enriching the knowledge of the candidates and increase their efficiency to solve the questions in the less time. ANTHE being a reputed institute offers the mock test to the students in order to guide them and prepare for the competitive exams.