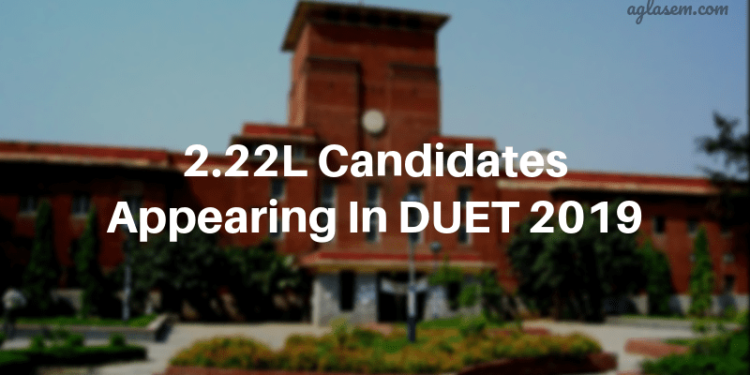 Delhi University Admission 2019 for the courses that are entrance based started from July 03, 2019. The entrance test is called DU Entrance Test (DUET) 2019. The exam is being held in 3 shifts each day.

The DUET 2019 Admit Card is available at du.ac.in. The candidates can download it using their form number and date of birth. The candidates have to carry the admit card on the day of the exam in the printed format so as to be able to appear in the exam

For the UG Admission in Delhi University, the candidates who are appearing for DUET 2019 are 81307, for the PG admission, the number of candidates is 128699 and in the M.Phil. and or Ph.D. entrance based exam the number candidates enrolling is 12355.

This year a total of 1929 PwD/Special Category Candidates have enrolled for the DU entrance based admission process.

DUET 2019 is being held in the computer-based teats format across 100 Examination Centers spread across 18 Cities. The exam is based on the syllabus and scheme as prescribed by the Delhi University.

The duration of the exam is of 2 hours and in this duration the candidates have to attempt the questions that are MCQ based.

The Delhi University Admission process is already progressing with its first cut off list declared on June 28, 2019, and the second cut off list releasing on July 03, 2019.

After the first cut off list, the number of candidates who have taken admission in the University is around 23000. The highest cutoff for DU Admission 2019 was for the BA (H) Political Science Course at the Hindu College i.e. 99%.

DU Admission 2019 is being done across 90 affiliated colleges of DU and 87 departments. As per the recent data on July 03, 2019 the largest number of admission has been made in the Shri Ram College of Commerce for the B.Com (H) course. The number of candidates admitted is 293.