Central Board of Secondary Education (CBSE) successfully conducted the 6th edition of JEE Main on April 8, 2018. The Board has now released the candidate data for the held exam. As per the provided official information, approximately 10,43,739 lakh aspirant registered to appear for the offline exam.

Out of the total, 6,46,814 were male candidates and 2,66,745 were females, 3 were transgender candidates. The pen and paper JEE Main was conducted in 112 total cities. Among these, 104 test cities were in India, whereas, 8 test cities were abroad. In all, the Board conducted the exam in 1613 India centers and 8 foreign centers. 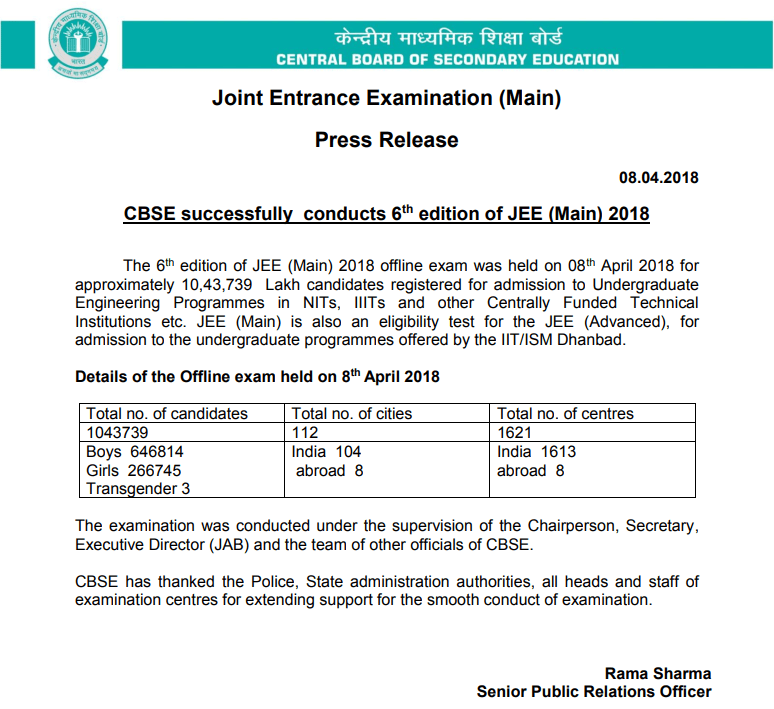 The JEE Main is conducted for admission to Undergraduate Engineering Programmes in NITs, IIITs and other Centrally Funded Technical Institutions etc. The examination was held without any irregularity and a huge credit for this goes to the pre-exam frisking formalities, which included metal detector checking. With exam getting over, answer keys have been made available too.

The question paper was divided into three sections namely Physics, Chemistry, and Mathematics. Candidates had to answer a total of 90 questions, 30 for each subject. All questions were objective in nature with four choices and there was only one correct response. A total of 360 marks question paper was to be done in the three-hour-long duration which started at 9.30 A.M and ended at 12:30 PM. Each correct answer will award four points and each wrong answer will deduct 1/4th mark.

According to experts, the difficulty level of the exam was moderate. However, students found it the paper to be a bit tricky and lengthy. The students had different opinions about the paper while some found chemistry challenging others were of the opinion that mathematics section was more time-consuming than chemistry and physics. The general opinion said that though the paper was largely normal it was tougher in comparison to the last year paper. Also, a majority of students found the mathematics section long and struggled with the time management they feel it would be tough to score a total above 230 in JEE Main 2018 Result.

JEE Main is also an eligibility test for the JEE Advanced, for admission to the undergraduate programmes offered by the IIT/ISM Dhanbad. While 10.43 lakh students appeared for the JEE Main exam but only 2.24 lakh students will be termed eligible for appearing in the JEE Advanced exam. The Advanced exam is scheduled on May 20, 2018, and the application process for it will begin on May 02, 2018.

UP Board Result 2018 By This Date; Just After, New Session To Start