The long drawn battle between state and petitioners on the matter of domicile requirement for DMER Maharashtra NEET Counselling 2018 and medical admissions comes to an end. The final hearing on 26 July says that student needs domicile, should have studied class 10, class 12 both in Maharashtra to be eligible for admission through 85% state quota.

Clause number 4.5, 4.6, 4.17 of the “Government of Maharashtra NEET UG 2018 information brochure of preference system for admission to Health Science courses in state government / corporation / private and minority colleges” was challenged in a writ petition.

As per the clauses applicable for NEET 2018 counselling in Maharashtra, candidates must have studied class 10 and 12 from Maharashtra. Also one needs to have a domicile of Maharashtra.

Nagpur bench passed an ad-interim order dated 11th June 2018 directing to accept the application of the petitioner (who passed SSC from an institution outside Maharashtra) and to process the same in state quota.

Then on 13th June, the Nagpur bench considered rule 5 (vii) (b) of notification dated 2nd September 2016 and considered the domicile, 10, 12 from Maharashtra requirement was inconsistent with those rules. The bench, therefore, passed an order asking the respondents to take note of the amendments.

In response, State CET Cell Maharashtra issued a notice saying that it was permitting students who have passed SSC from outside Maharashtra to apply. However it added that admissions will be subject to final decision of pending proceedings. 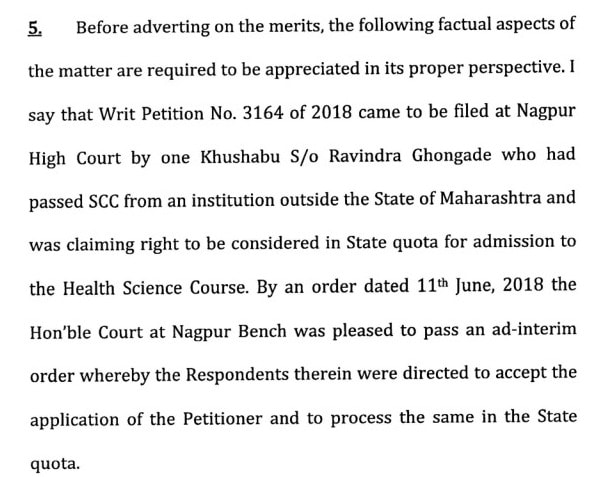 Pursuant to notice in question, the following figures arose:

Not a single candidate who had filed petition at Nagpur bench could secure admission. 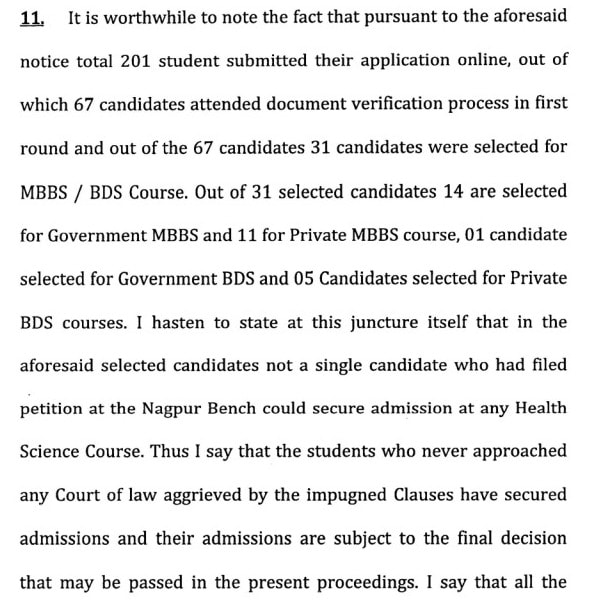 On 17 July 2018, State Common Entrance Test Cell of Maharashtra published a notice saying that admission of students will be subject to final decision of proceedings then scheduled to be held on 23 July.

How The Respondents Stated Their Claim

Before MCI Regulations on Graduate Medical Education 1997 came into place, eligibility criteria for state admission was that candidate should have studied HSC from Maharashtra.

After the rule was implemented it became compulsory for any state with more than one medical college to hold its own medical entrance exam. So MH CET started being conducted from 1999.

State government also framed rules and regulations governing rule 4.4 framed by Maharashtra University of Health Sciences, required that student will be eligible for admission to health science course only if he or she has passed the SSC examination from Maharashtra. Moreover rule 4.5 required as condition that they should pass HSC form the state too.

In an earlier case, one Rajiv Purshottam Wadhwa had challenged it. As per All MR 2001 (1) 824, the court upheld that the requirements were valid. However it gave a one time exception in year 2000-2001.

In 2017-18 also there was a challenge against requirement of passing SSC from Maharashtra. Aurangabad Bench in matter of Aalia Kausar Mohammad Shafee v/s state of Maharashtra in writ petition 8268 of 2017 observed that this clause for same admission year (2017) should not be a hurdle for getting admission if student already has domicile certificate. This was applicable only for 2017-18.

The intentions of state government in framing such rules are to protect interests of the state. It has to consider local requirements.

Such rules are also framed by other states like Karnataka, Punjab, Kerala, Andhra Pradesh, Uttar Pradesh that restrict admission on basis of domicile. In other states though, percentage of such seats vary from 40% to 50%.

In Maharashtra the rules in place are that student should have passed class 10, 12 from Maharashtra state and also have domicile of Maharashtra. According to respondents, it is to weed out such candidates who were not in continuous residence of the state for at least 15 years prior to examination. They say that such rules are not in violation of Article 14 of Constitution of India. 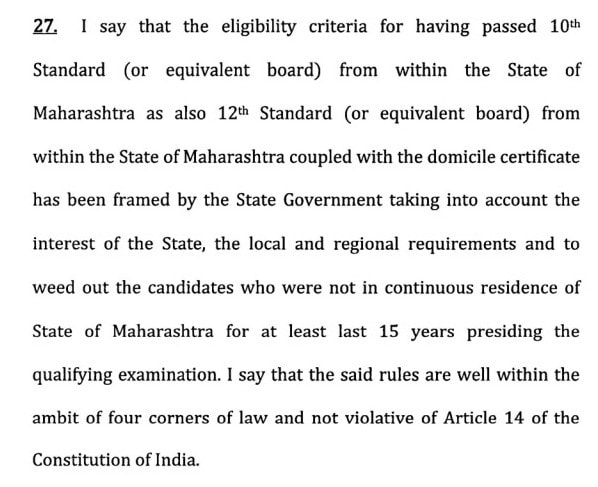 NTA JEE Main, NEET 2019 Practice Tests Will Be Free; Schools And Engineering Colleges To Be Centres

NTA JEE Main, NEET 2019 Practice Tests Will Be Free; Schools And Engineering Colleges To Be Centres