Home » Competitive Exams » NTA UGC NET Admit Card 2019 To Be Available For Download From Today, Delay Of One Day Due To Form Extension

NTA UGC NET Admit Card 2019 To Be Available For Download From Today, Delay Of One Day Due To Form Extension

National Testing Agency (NTA) had to unfortunately, delay the release of UGC NET Admit Card December 2019 by a day. A notification released just now says that now the admit card will be available from today. 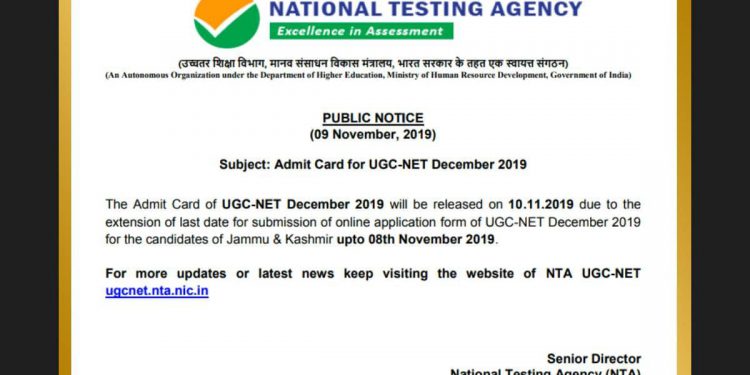 After a day’s wait, National Testing Agency (NTA) has finally published a notification about UGC NET Admit Card 2019. As per the notice, the admit card will now be available from November 10, 2019, that is today. It may be noted that the examination hall ticket was supposed to be available from yesterday.

NTA says that they had to delay the event by a day as application form submission for Jammu Kashmir candidates had been extended upto November 8, 2019. Which is true, the agency had re-opened applications for JnK candidates for a five day window for JEE Main, IIFT, UGC NET, and CSIR NET.

The notification released by NTA about delay in UGC NET admit card 2019 and its new date says, “The Admit Card of UGC-NET December 2019 will be released on 10.11.2019 due to the extension of last date for submission of online application form of UGC-NET December 2019 for the candidates of Jammu & Kashmir upto 08th November 2019. For more updates or latest news keep visiting the website of NTA UGC-NET ugcnet.nta.nic.in”.

However, CSIR NET admit card was released yesterday, by NTA only. For CSIR NET also the pre-informed date for admit card download commencement was November 9, 2019, and for that exam also form filling was ongoing for JnK candidates until a day before the admit card release date, and yet NTA was able to release admit card for CSIR NET but not UGC NET.

Nevertheless, it is also true that the number of applicants in UGC NET is higher than CSIR NET. Hence processing of the forms in such short duration may have taken time.

Now today, NTA may release UGC NET admit card at any time. It will be available for download from ugcnet.nta.nic.in. Candidates will need their application numbers and password in order to download the admit cards.

In the last exam, the admit card download date for UGC NET was first delayed by 13 days, and then one more day.

Going by reports for UGC NET December 2019, even more number of candidates, around 10 lakh have applied this time. The growing popularity of the exam is owed to two things. One is more and more candidates wishing to become lecturers or assistant professors in government institutes, that require UGC NET. And second is the fact that few companies including PSUs now do recruitment through UGC NET.

Around 3 lakh have applied for CSIR NET December 2019. Admit card for which, is available at csirnet.nta.nic.in.

NTA, an autonomous organization under the Department of Higher Education, Ministry of Human Resource Development, Government of India is conducting both exams.