Introduction of the NMC act leads to scrapping of AIIMS, JIPMER entrance exams; they will both come under NEET now. 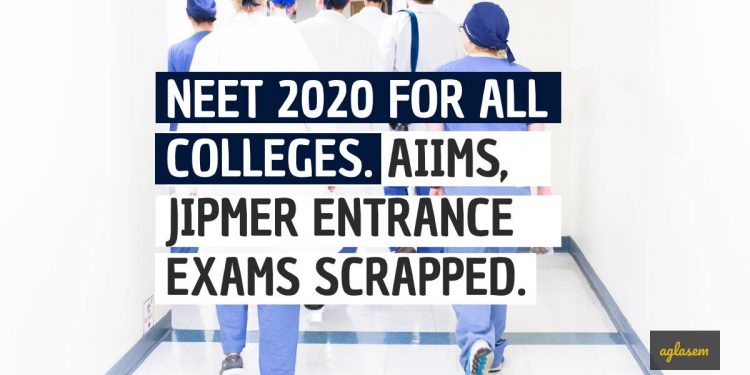 Although official notification in this regard has not been published anywhere yet. All major newspapers have cited the minister’s announcement; confirming the reports.

Up until now the government had allowed only three medical entrance exams in India – NEET by NTA, AIIMS MBBS by the All India Institute of Medical Sciences, and JIPMER MBBS by the Jawaharlal Institute of Postgraduate Medical Education and Research.

Official statements in the form of written notifications from MHRD, MOHFW, AIIMS, JIPMER are expected soon. The official website of NTA is nta.ac.in, for NEET it is ntaneet.nic.in, AIIMS website is aiimsexams.org, and JIPMER announces notifications at jipmer.edu.in.

Students have started questioning the validity of the news since none of the bodies have published official notifications yet. However the truth is that the media reports seem quite irrefutable as of now. We are keeping a close eye on the developments and shall report here as soon as they come.

Why are AIIMS and JIPMER being cancelled?

AIIMS and JIPMER are being scrapped due to the implementation of National Medical Commission (NMC) Act 2019, as per which, there can only be one entrance exam in India.

Whereas the bill has also recommended the introduction of NEXT, for after MBBS, however there will be a three years window between now and the implementation of NEXT.

How does this decision impact students?

This is a major change for all medical aspirants in India. More than 14 lakh class 12th students appear in the NTA NEET exam, competing for the 75,000 odd MBBS seats. Whereas close to 2-3 lakh students each appear in the AIIMS and JIPMER entrance exams.

Both AIIMS and JIPMER are among the top ranked medical institutions in India. AIIMS New Delhi is ranked at #1 as per NIRF medical ranking 2019, and JIPMER is at #8 in the same ranking. Considering the undeniable reputation of the colleges, students ferociously competed for their seats.

On one hand, this decision will make it easier for students to focus on a single exam; here it may be noted that the pattern of AIIMS and JIPMER differ slightly from NEET. However on the other hand, now all bets are on a single exam; the pressure of performing well on a single day would be too high.

Editor’s note: Students preparing for AIIMS 2020, JIPMER 2020 alongside NEET 2020 are advised to wait for official notification before changing preparation strategy at this point.

AIIMS and JIPMER under NEET from 2020, confirms PTI news