Ministry of Railways publishes clarification on RRB JE Result 2019 on Twitter in light of protests, says RRBs are following CEN

In light of the recent reports and protests over RRB JE Result 2019 of CBT 1, Ministry of Railways publishes a clarification and tweets about it. 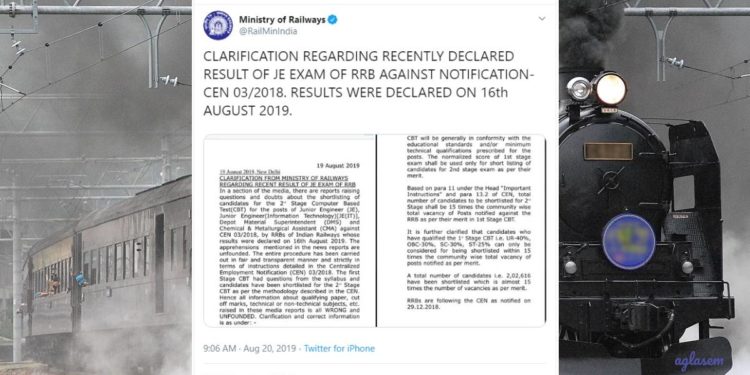 Ministry of Railways published a clarification through twitter today, regarding RRB JE result that was recently announced. Scanned copy of a two page document has been uploaded at the official twitter handle @RailMinIndia. The clarification comes in light of reports surrounding dissatisfaction among candidates who had appeared in the first stage computer based test for Junior Engineer recruitment against CEN 03/2018.

The clarification starts with, “In a section of the media, there are reports raising questions and doubts about the shortlisting of candidates for the 2” Stage Computer Based Test(CBT) for the posts of Junior Engineer (JE), Junior Engineer(Information Technology)[JE(IT)], Depot Material Superintendent (DMS) and Chemical & Metallurgical Assistant (CMA) against CEN 03/2018, by RRBs of Indian Railways whose results were declared on 16th August 2019. The apprehensions mentioned in the news reports are unfounded. The entire procedure has been carried out in fair and transparent manner and strictly in terms of instructions detailed in the Centralized Employment Notification (CEN) 03/2018. The first Stage CBT had questions from the syllabus and candidates have been shortlisted for the 2nd Stage CBT as per the methodology described in the CEN. Hence all information about qualifying paper, cut off marks, technical or non-technical subjects, etc. raised in these media reports is all WRONG and UNFOUNDED.”

The reports referred to here pertain to reports that candidates were unhappy with the RRB JE CBT 1 result on two major grounds. First concern raised was that too many candidates have been disqualified on the basis of non-technical paper, whereas the posts are technical in nature. The second concern was that CBT 2 will take place too soon after the result and candidates are not getting a lot of time to prepare. However the candidates who took to the streets to protest against the result focused primarily on the former, and raised slogans of “fair RRB JE Result”.

Railway recruitment is extremely popular among government job aspirants. As a result, a whopping number of candidates had applied in response to the Junior Engineer recruitment notification. 18-33 year olds, with diploma or degree in relevant stream could apply.

Answering the questions raised by candidates and media reports about removing close to 92% candidates on the basis of a non technical exam (CBT 1), the Railways says, “The syllabus of both the Stages of the CBTs have already been mentioned under para 13.1 & 13.2 of the CEN 03/2018. The 1st Stage CBT syllabus comprised of questions from Mathematics(30 marks), General Intelligence & Reasoning(25 marks), General Awareness(15 marks) and General Science (30 marks). It is not correct say that the pattern of CBT was non-technical.”

The ministry further clarifies that the exam was already said to be screening nature, and was designed to suit the eligibility criteria set for the posts advertised.

“As per para 13.1 of the CEN, it has been stated that the 1st stage CBT is of screening nature and the standard of questions for the CBT will be generally in conformity with the educational standards and/or minimum technical qualifications prescribed for the posts. The normalized score of 1st stage exam shall be used only for short listing of candidates for 2nd stage exam as per their merit.”

The fact that RRBs had already said that only fifteen times the vacancy will be shortlisted for CBT 2 has been reiterated in the clarification.

“Based on para 11 under the Head “Important Instructions” and para 13.2 of CEN, total number of candidates to be shortlisted for 2nd Stage shall be 15 times the community wise total vacancy of Posts notified against the RRB as per their merit in 1st Stage CBT.”

“It is further clarified that candidates who have qualified the 1* Stage CBT i.e. UR-40%, OBC-30%, SC-30%, ST-25% can only be considered for being shortlisted within 15 times the community wise total vacancy of posts notified as per merit.”

RRB JE CBT 2 exam date, city intimation, free travel pass are available as on this date for August 28 to 30, 2019 exam dates. For the remaining two dates that are August 31, and September 1, they will be available tomorrow and on the day after tomorrow respectively.