Home » JEE Main 2019 Percentile / NTA Score: 5 Things You Should Know About It Before Appearing In Exam

JEE Main 2019 Percentile / NTA Score: 5 Things You Should Know About It Before Appearing In Exam NTA will conduct the JEE Main 2019 April exam between April 07 – 20, 2019. The exam will be held in 2 shifts per day. Thus, NTA will declare the score of the exam on a percentile basis and not on raw score basis. In the January exam, in Paper I, 15 students have scored 100 percentile and in Paper II, 2 students got 100 percentile.

The candidates who have already appeared in the January exam and are planning to appear in the JEE Main April exam might be thriving now to improve their percentile scores. NTA is going to prepare the All India Rank List based on the best percentile score of the candidates out of the 2 attempts.

However, the candidates who are applying for the April exam for the first time this year might be curious about how and why the percentile sores are being used and not the raw scores. Thus, here we have discussed 5 things you must know about JEE Main 2019 NTA scores (percentile scores).

NTA refers to the percentile scores of JEE Main exam as the NTA scores. Here are 5 important things you must know about it before you appear in the exam.

#3:
Why is NTA using NTA score for result preparation and not the Raw scores: This step is being taken because the exam is being held over days session and in multiple shifts. This indicated that in spite of efforts to keep the difficulty level even in each session, there might be variations in difficulty level. To avoid such situations, NTA has decided to calculate the NTA score and use it for the AIR preparation instead of the raw scores.

#4:
How is the AIR prepared based on the NTA score: NTA has already announced the JEE Main 2019 January Result. In addition to that, the April exam registrations are going on. Once the April exam is over, the result for the same will be announced. Now for the candidates who have appeared in both April and January exam, their names in the AIR will be based on their better percentile out of both the exams. Those have appeared in either January or April exam will have their name in the AIr based on one score only, either of the April exam or of the January exam. The candidates will higher percentile score will be placed higher in the rank list. 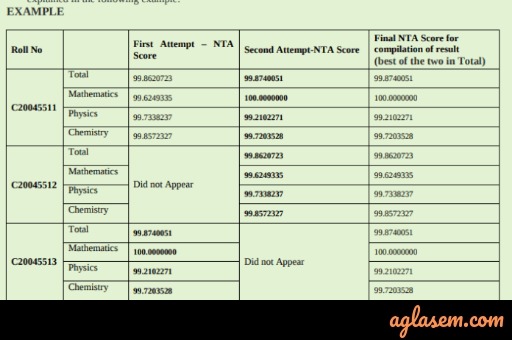 JEE Main 2019 April Exam: This is the second JEE Main exam for the year 2019. The best NTA scores of the candidates out of both the attempts will be used for admission in the NITS, IIITs and CFTIs. Many other participating institutes like Amrita University, Jamia Millia Islamia, Indian Institute of Space Technology etc accept JEE Main scores. Recently, GGSIPU has also announced admission based on JEE Main 2019 scores.

The exam is expected to be held across 467 centres in 258 Cities. More than 11 lakh candidates are expected to appear in the exam this time.