Goa Board to announce Class 12 Result by April End The announcement of Goa Board Class 12 Result can be expected by April end. The Goa Board exam for class 12 began on March 5 and concluded on March 26. The exam for vocational stream students began on March 6 and concluded on March 17, 2018. Goa Board of Secondary and Higher Secondary Board (GBSHSE) will release the Board result for all the stream on the same day. In addition to this, class 12th Result for a Vocational stream is also expected. The GBSHSE 12th Result 2018 will be made available online on the official website of the Goa Board i.e. gbshse.gov.in.

This year, the Goa Higher Secondary School Certification (HSSC) Exam was held across 16 exam centres across the state. Approximately 17,000 students are waiting for their Goa Board HSSC Result 2018. Students will be able to check their result online. The result will be accessed on the portal, gbshse.gov.in, just by entering the respective roll number/seat number.

Last year, the Goa Board completed the task of evaluating answer sheets in a short span of one month and announced the Goa Board 12th Result on April 27, 2017. This was because the HRD Ministry has directed all state boards including the Goa Board to declare Class 12 Results early to help facilitate the compilation of data for IIT-JEE Rankings and other institutions. Thus, this year too, by April end, GSEB will declare Goa board Class 12 Result.

As per the GBSHSE, the stream-wise passing percentage last year was: 88.12 percent for science, 87.53 percent for arts, 96.70 percent for commerce and 88.15 percent for vocational.

Further, the last year’s stats mentions that more than 16000 students had appeared for the class 12 state board examination and girls had outnumbered boys. “Total 88.77 percent students cleared the examination. Out of the 16,521 students who appeared, 14,666 have cleared the exam”, said J.R. Rebello. He also said that total 23 schools reported 95 percent and above result. 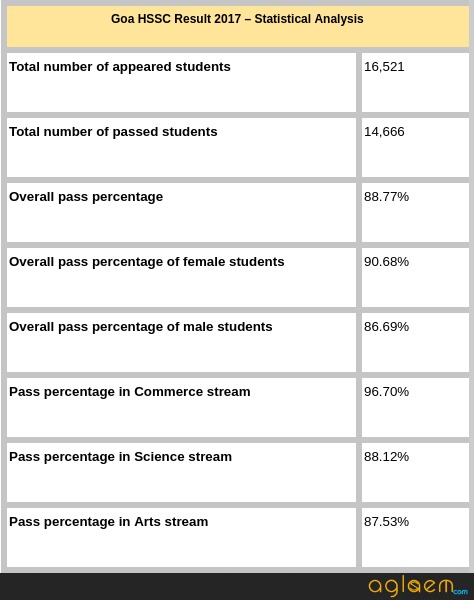 About Goa Board of Secondary & Higher Secondary Education (GBSHE): The responsibilities of The Goa Board of Secondary & Higher Secondary Education (GBSHSE) includes advising the government on education policies, implementation of education policies in the affiliated schools and conducting evaluation through yearly examination at secondary and higher secondary level. In line with this, the GBSHSE conducts the annual board exams for the class 10 and class 12 students every year in the month of March followed by the declaration of Goa Board Result.

Comment below for any query or help. All the best! JNVST 2018 Held Successfully On 21 April - Know What's Next; Exam Postponed In Some Districts