GATE admit card 2022 will not be released as scheduled on Friday. The new release date will be announced soon. Exam date has not been postponed. 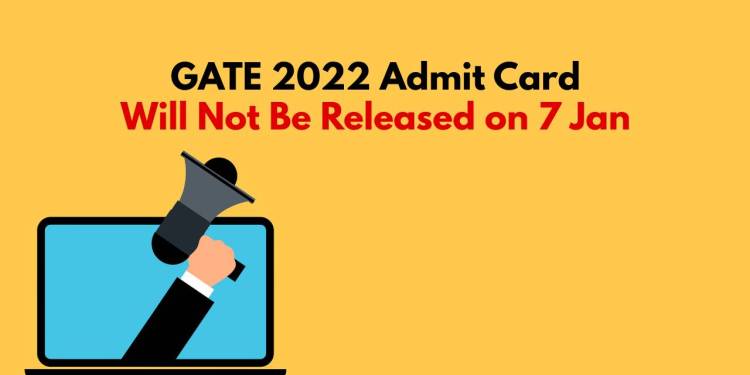 IIT Kharagpur has once again deferred the release of GATE 2022 admit card. On the official website gate.iitkgp.ac.in, they have put up this short notice that says “Date of Downloading GATE 2022 Admit Cards will be announced shortly“.

Whereas the important dates section of the website was earlier showing tomorrow, i.e. January 7, 2022 as the release date. Now it says “To be announced – Admit Card will be available for download.“

IIT KGP, the organizing body of this year’s Graduate Aptitude Test in Engineering (GATE 2022) has not provided any explanation on why they have taken this step.

At this point it is relevant to point out that the exam dates have not been changed yet. The national level exam is still scheduled to be held on four dates in February which are February 5, 6, 12, and 13, 2022.

This is the second time that the release of the exam’s admit cards have been deferred. Initially the admit card was supposed to be released on January 3, 2022. Candidates faced a short wait on that day. That day, at around 9:30 AM, IIT KGP changed the release date on the website to January 7, 2022.

Now this time, the notice for deferment has been put up a day in advance. This time candidates were spared the wait.

However now these question arise – Why has this happened? Will exam be postponed? Is it a technical issue?

In the pre-covid era, any delays in admit card, results were mostly due to technical issues. IITs are also not spared from technical mishaps, and many a times candidates have complained about GOAPS crash either during application form submission, or admit card download, or while checking result. Thus one of the possibilities for delay on admit card release could be technical issues.

However times have changed. And nowadays, the first thought that crosses our mind when admit cards are delayed is that the authorities may be considering postponing the exam. Especially now that the third wave has been officially declared, there is thus a looming possibility that GATE 2022 could be postponed.

But, and this is a big but, as of now there is no official announcement on GATE 2022 being postponed. Thus, candidates must in all good faith continue their preparation.

In conclusion, the wait for GATE admit card 2022 release will be a bit longer. The new release date is anticipated to be issued soon.