Candidates can only know their final status through email and sms sent by Railways. There is no other way to do it. 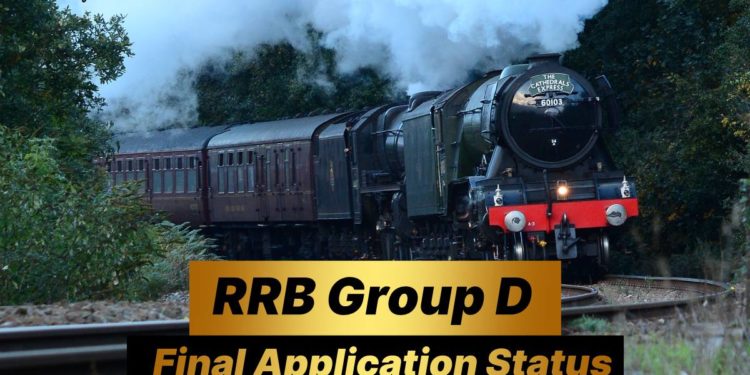 Railway Recruitment Boards have released the final RRB Group D application status 2019 against RRC CEN 01/2019 today. Candidates have received email and SMS about whether their form is now accepted or rejected. It is reported that applications of around 4 lakh candidates were rejected on the grounds of invalid photograph and signature. The ratio of final number of approved and rejected applications, is expected to have increased now.

To know the final status, candidates need to check their registered email ID and sms. RRBs have not activated any link at RRB websites or rly-rect-appn.in to check status. A short message conveying whether form is accepted or rejected has been sent to candidates. As no direct link to check application status is available, looking at email and sms is the only way to know the final result.

It is reported that only candidates who had submitted complaints against their rejected application form during August 17 to August 23 have received email and SMS. Those who have shared screenshots of the sms and email on social media have mostly confirmed that their forms still stand rejected.

However few candidates do say that either their, or their friends’ application form status has changed from rejected to accepted.

Initially RRBs were supposed to send the final status by August 31. Then they changed the date to September 6. However candidates had been waiting all day yesterday for RRBs to issue the status but no one received any message. It was only since today morning that the messages started coming in. AglaSem had reported that as RRBs had not released any notification about a new date for the final status, therefore it was expected within 24 hours, and that is exactly what happened.

It is critical to note now that RRBs, Ministry of Railways, Govt of India has clearly stated that this is the final application status, and after this, no further changes will be done. Hence, candidates whose application forms are accepted as per this can await admit card, exam city intimation, and other events. However those whose forms are rejected, can unfortunately not take part in the recruitment process.

Next – RRB Group D exam date 2019 will be announced first. It is expected that the computer based test will be held in September-October. After exam dates are out, RRBs will activate link to know their exam date, city, and shift which is known as the RRB Group D city intimation 2019. Then after that, link to download RRB Group D admit card 2019 will be available. Each candidate will be able to download their admit cards, a few days before their exam dates. Looking at the usual railway recruitment timelines, it is anticipated that admit card will be released around 4 days before exam.

Have you received your final RRB Group D Application Status 2019? Has your form been accepted or rejected? Share in comments below.