This year for the first JEE Main 2019 exam, a total of 9.65 lakh registrations are received. NTA is releasing the admit card for all the candidates who have registered successfully. The JEE Main 2019 Admit Card for the January Exam will be available from December 17, 2018.

Last year the total registration received was 11.5 lakhs. Out of which, 10.4 lakh candidates appeared in the exam. The total registration has lowered this year because in January many candidates might be preferring to concentrate only on their board exams. The CBSE practical exams are conducted in January too, thus the participation might have been lowered. The registrations are expected to be much more for the second exam that will be held between April 06 – 20, 2019. 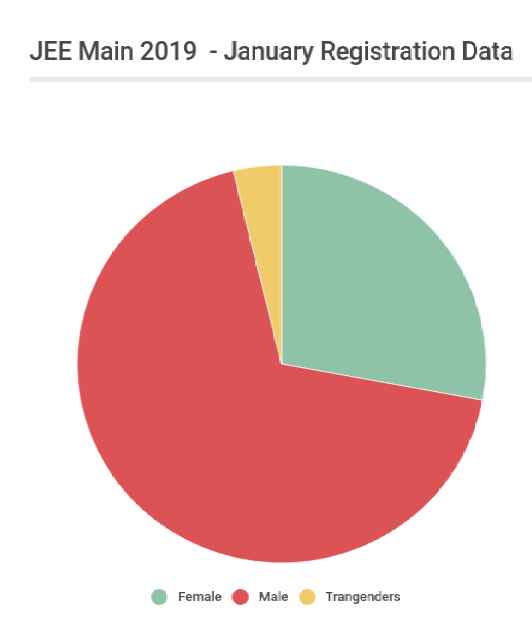 Earlier the JEE Main exam was conducted by CBSE. Now, from 2019 onwards this exam is being conducted by the National Testing Agency (NTA). The gender diversity in the engineering colleges has always been very distorted in case of the female students. Thus, the government this year has issued a directive to restore the gender gap in the engineering colleges. As an initiative in this direction, the NITs will also work towards increasing female enrolment in B.Tech programmes at the level prescribed by the IITs.

In NITs, especially in the computer science and electronic engineering branches, the female candidates are very low.

The number of candidates who will be participating in JEE Main 2019 will be twice. This is because almost 9.65 lakh registrations have been received in the first exam alone. The registration will definitely be more for the second exam. Thus, the total registration of both JEE Main exams will be quite higher.

Impact on enrollment of students has been seen as a rise in participation, as NTA is now giving 2 attempts a year to crack the JEE Main exam. There is all advantage in this scenario for the students. Even if the first attempt goes bad, the second one can be used to improve the marks. The highest score of the two attempts will be used to prepare the JEE Main 2019 AIR.