Home » FCI Admit Card 2019 To Release Today; This Is How Candidates Will Know When Hall Ticket Is Available At fci.gov.in

FCI Admit Card 2019 To Release Today; This Is How Candidates Will Know When Hall Ticket Is Available At fci.gov.in 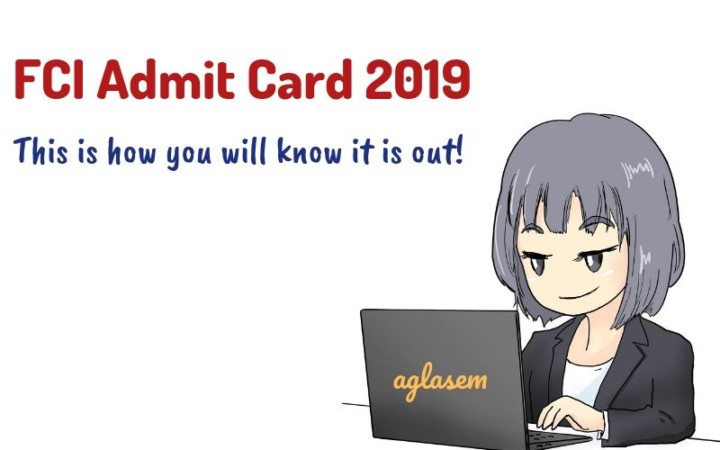 Food Corporation of India is supposed to release FCI Admit Card 2019 today. The admit card / hall ticket will be released for AG 3, AG 2, Steno, Typist, JE for phase 1 online exam that will be held from May 31 to June 3, 2019. It was only on the first Thursday of this month that the exam dates of FCI Recruitment 2019 for 4103 vacancies were announced.

Reportedly, lakhs of candidates have applied against Advt No 01/2019 FCI Category III. And all of them have been looking for admit cards since morning. In order to know the time at which admit card will actually release, officials were contacted. However, they could not give a specific time.

Nevertheless, officials informed that all those who have applied will get email and SMS as soon as FCI releases admit card. Therefore applicants must keep an eye on the official website, as well as their registered email address and mobile numbers. They will receive email and SMS with direct link to download admit cards.

They further mentioned that the Corporation always sticks to its timeline when it comes to release of FCI admit cards. If at all there is any delay, it is because of technical setbacks. Thus, candidates across the country can be rest assured that they will get their admit cards on time.

Date of issuance of admit cards is not mentioned in either recruitment notification or exam date notification. However the former mentions timeline for admit card download. It says

Admit Card for the ONLINE Test indicating the time and venue of examination for each candidate can be downloaded from http://www.fci.gov.in 15 days prior to the date of examination onwards.

Since exam dates are as mentioned above, therefore admit card date comes out to be today, that is May 16, 2019.

For the purpose of selection, there are two online tests namely phase I and phase II. In phase I, there are three tests that are English Language, Reasoning Ability, Numerical Aptitude. First one has 30 questions of 30 marks , and other two have 35 questions of 35 marks each. Each test of 20 minutes. For every incorrect answer, ¼ of marks assigned to that question are deducted as penalty or negative marking.

Food Corporation of India is a government organization. It was established in 1965. It has 5 zonal offices and 24 regional offices. Zonal offices of FCI are in North – Noida, East – Kolkata, West – Mumbai, North-East – Guwahati, South – Chennai.