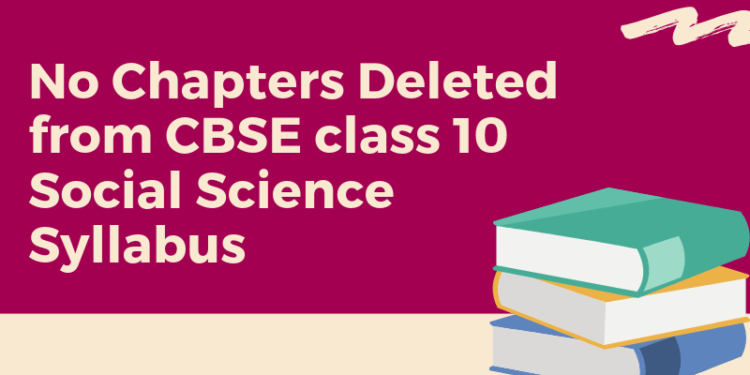 As per the latest news, there were some websites and newspapers according to which the CBSE Board has deleted 5 chapters from class 10 Social Science. However, the Central Board of Secondary Education has denied that it has not made any changes in the syllabus of class 10. For this, the board has also released the notification for the same. According to the notice, no chapters have been deleted from the syllabus of Social Science Class 10 by the Board. The candidates of class 10 will have to study the due course of time.

Earlier, some newspapers claimed that the CBSE Board sent them a notification and as per the notification, there are 5 chapters named Democracy, Democracy and Diversity, Political Struggles and Movements, Forest and Wildlife and Water Resources will be removed. These chapters will not be evaluated. Now, the board has denied this report.

The CBSE Board is receiving numerous requests regarding having a look at the syllabus of Social Science as the students need to study the four different disciplines such as History, Geography, Political Science and Economics. So, now, the board has decided to implement the new assessment strategy. It would be evaluated as per the strengthened school-based assessment.

This year, the CBSE Board will release the result of class 10 and 12 in the month of May 2019. However, there are no confirmed dates available for the result declaration. But as per the notification issued by the board, this year, all the activities related to the exams will be happed 15 days earlier.

Last year, the result of CBSE class 10 and 12 students were announced on April 29, 2019. So, in the current year, the students may get their results in the first or in the second week of May 2019. The students will get the results online on the official website cbse.nic.in. The link of the result will be available there. In order to check it, they will be required to enter the roll number. The roll number of the students must be the same given on the admit card.

The Central Board of Secondary Education (CBSE) was established on November 03, 1962 in Delhi. They set up their office in New Delhi. CBSE is responsible to conduct the exams for Secondary and Sr. Secondary. It has more than 10,000 private and government schools affiliated with it. The board conducts the exams and also declares the result for the same.