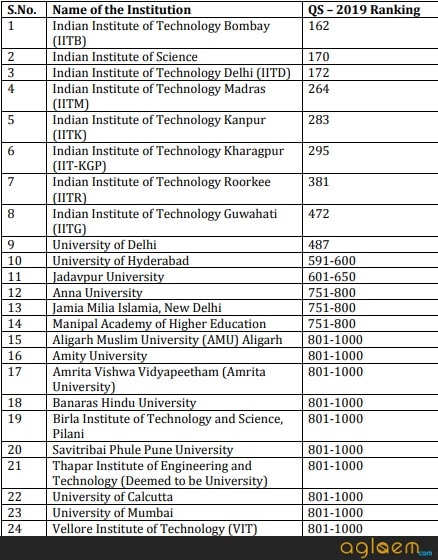 What is the QS World Universities Rankings?

The Quacquarelli Symonds (QS) releases annual publication consisting of university rankings. It is also one of the widely read and reputed university rankings in the world. The ranking of the universities is based on six parameters. The universities are evaluated after considering their Academic Reputation (40%), Faculty/Student Ratio (20%), Employer Reputation (10%), International Faculty Ratio (5%), International Student Ratio (5%), Citations per faculty (20%).

How are Indian institutions improving their ranking?

In the latest statement by Prakash Javedkar, he said that the institutions of higher education in India have improved their research productivity. Due to their continuous effort and contribution, the institutes have been able to embark higher and improve their ranking. To support these institutions Government of India (GOI) has launched various programmes for competitive based funding of research projects. Some of the already launched schemes are Uchhatar Aviskar Yojna and IMPRINT.

In addition to that, many institutions have prepared a three-year action plan, a seven-year strategic plan, and a fifteen‐year vision plan to improve the global ranking.