UPTET 2018 Online Application To Start On 18 Sep Afternoon at upbasiceducationboard.gov.in UPTET 2018 apply online link shall be activated on September 18, 2018. Candidates can fill online form and pay fee online. Aspirants get a window of more than two weeks to apply online until October 4, 2018 until 6 PM. Last date to pay fee is October 5, 2018. Those who apply and submit form online can print in until October 6, 2018, 6 PM. Check details online. 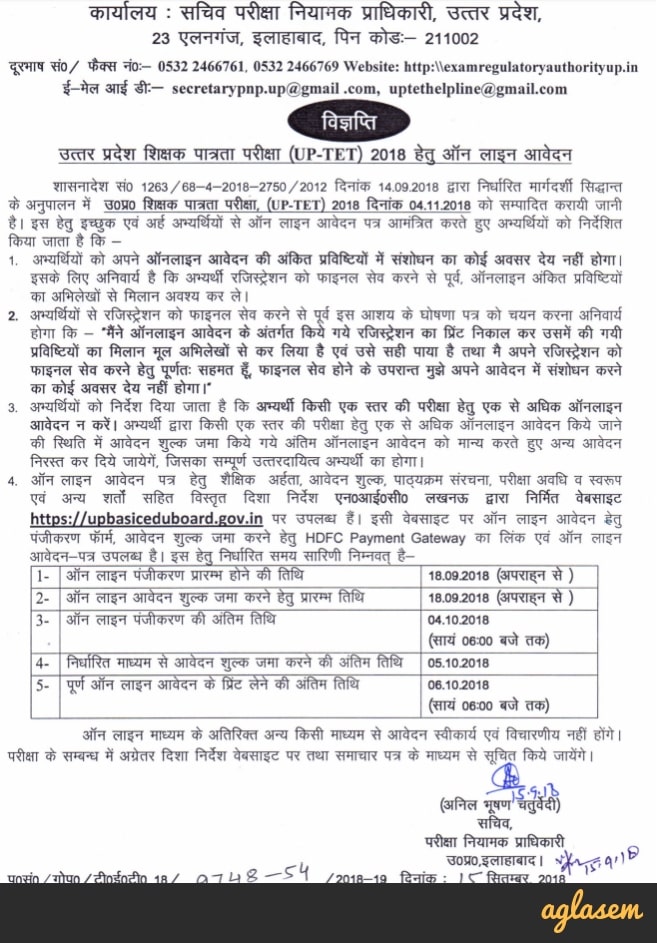 As per notification, UPTET 2018 online application form should be available from “aparahn” that means afternoon of September 18, 2018. Candidates must check eligibility criteria prior to applying.

Thousands of aspirants have been waiting eagerly for officials to issue official notification, brochure, and application form.

There will be many candidates who will appear for CTET and also UPTET. Since exams are so close to each other, it will be an added benefit from preparation point of view. Preparation for both TETs shall be quite similar and hence candidates can simply study same syllabus and practise previous year question papers of CTET and UPTET to polish their knowledge.

When candidates apply online they should note that they will not get any chance to change / edit / correct details once filled in online application form of UP TET 2018. Therefore they are advised to check all details carefully before doing a final save of their registration. Details filled in application form must match official records of applicant.

Notification further states that when an applicant clicks on final save button of online application form, they should first go through letter of intent.

Exam conducting body guides that candidates should fill only one application form for UP TET 2018 for one paper. In the event that more than one form is filled, last filled form with fee is considered final and all others shall be rejected. Candidate himself will be responsible for cancellation of all other forms.

All details of UPTET 2018 online application form, educational qualification, fee, syllabus, exam pattern are made available at NIC Lucknow website upbasiceducationboard.gov.in. It is at this website only that interested candidates must apply and pay fee using HDFC payment gateway.

Applications shall not be accepted in any other mode except offline.

Pariksha Niyamak Pradhikari, or the Examination Regulatory Authority, Allahabad, UP is the body that looks after several education and career related exams in the state. Lately the body had also organized UP BTC (D.El.Ed) 2018 admissions also. UP BTC document verification ended in July this year.

Prior to that, the body had conducted recruitment for 68500 Assistant Teachers in Uttar Pradesh. Its result was announced on August 13, 2018, and district wise counselling took place in first week of September.

Teacher Eligibility Tests are held in almost every state in India. Recently Government of Karnataka has announced that KARTET 2018 will be held soon and its notification will be published on September 22, 2018. Also, CTET 2018 will be held on December 9, 2018. Year 2018 seems to be a big year for teaching job aspirants as several major teacher eligibility tests are taking place this year.

In order to teach classes I to VIII in a government school, one must have qualified TET. This has been mandated as per NCTE regulations. The TETs aim at testing a candidate’s aptitude in child development pedagogy as well as subjects.

Candidates need to score at least 60% marks in the teacher eligibility test to qualify it. There is relaxation for reserved category although. Thus those who apply must prepare in such a way as to obtain qualifying marks. Qualified candidates are issued TET pass certificates.

It is also being said that UP Teacher Recruitment Test will take place in December. It is expected to be a large recruitment process which will benefit those who have previously cleared UPTET exam and also those who appear in this year’s TET for Uttar Pradesh state.

As per DISE 2011, there were 92 lakh enrolments in upper primary classes, and 2.6 crore in primary classes. UP has been witnessing an upward trend in literacy rate too. Although there exists a visible gap between that of male and female education (77.28% literacy rate of males and 51.36% of females), as per a paper published by CEI India.

Karnataka TET 2018 Notification To Release On 22 September at schooleducation.kar.nic.in

UPTET 2018 Registration Started, Apply till October 04; Know how to apply for UPTET

UPTET 2018 Registration Started, Apply till October 04; Know how to apply for UPTET