UPSC IES 2020: Indian Economic Service Exam to be Conducted in October 2020, Decision to Cancel Exam is Taken Back by Commission, Check Notice Here!

After initially canceling the Indian Economic Service 2020 exam, the UPSC has now decided to conduct the exams in October 2020 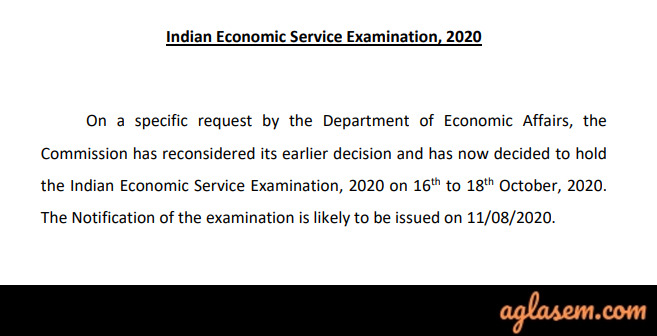 The Union Public Service Commission has finally announced the exam dates of Indian Economic Service 2020 recruitment after initially canceling the exam due to reported lack of vacancies. As per the official press release published at the UPSC website earlier today, the IES 2020 exams are scheduled to be conducted from October 16 to October 18, 2020. Accordingly, the Commission has also indicated that the official notification for the UPSC IES 2020 exam is tentatively releasing on August 11, 2020. For the convenience of our readers, the snapshot of the notice extracted from the official UPSC website is provided below.

Incidentally, the Indian Economic Service & Indian Statistical Service recruitment exams have been traditionally conducted together. In 2019, the official notification for the IES and ISS exams were published together and the UPSC conducted combined exams for the selection of eligible applicants. However, this year, UPSC released the notification and schedule of events for conducting the Indian Statistical Service (ISS) exam only. Additionally, the Commission also released a public notice indicating the cancellation of the Indian Economic Service 2020 exam due to the lack of any vacancies in the said service cadre.

As per the earlier notification released by UPSC in regards to the conduct of the IES 2020 exam, it stood canceled due to zero vacancies reported for the Indian Economic Service (IES) by the Ministry of Finance (Department of Economic Affairs). However, now that the Commission has released the latest press note in regards to the IES 2020 exam, the exam is scheduled to be conducted in October 2020. As per the new official notice, the Commission has reconsidered their earlier decision on special request by the Department of Economic Affairs and decided to conduct the exam in October 2020. Additionally, since the official notification of IES 2020 was not released earlier, aspirants can now expect the notification to be out on August 11, 2020.

Since the official notice of IES 2020 is tentatively releasing in August 2020, the online registration and application process for the same can be expected to commence in August/September 2020. Based on the previous year selection method and exam scheme of the India Economic Service exam, a single written test is conducted by the UPSC. The written exam consists of 06 papers in all identified as General English, General Studies, General Economics I, II & III, and Indian Economics. Each of these papers is conducted for a duration of 03 hours and apart from the papers of General English & General Studies which carry 100 marks, all the other papers carry 200 marks in total. Candidates can expect the updated scheme and pattern of exam and other information to be available with the release of the official IES 2020 notification in August 2020.