The government is considering a report by the Baswan committee to tweak some key changes in the Civil Services examination pattern and reducing the upper age limit of 32 years. The proposal is presently being monitored by the Union Public Service Commission (UPSC). The application by the committee was received in August last year. It was then received along with the recommendations by the UPSC in March, this year.

UPSC earlier constituted a committee in August 2015, under the chairmanship of the former human resource development secretary and retired IAS officer B S Baswan for review. 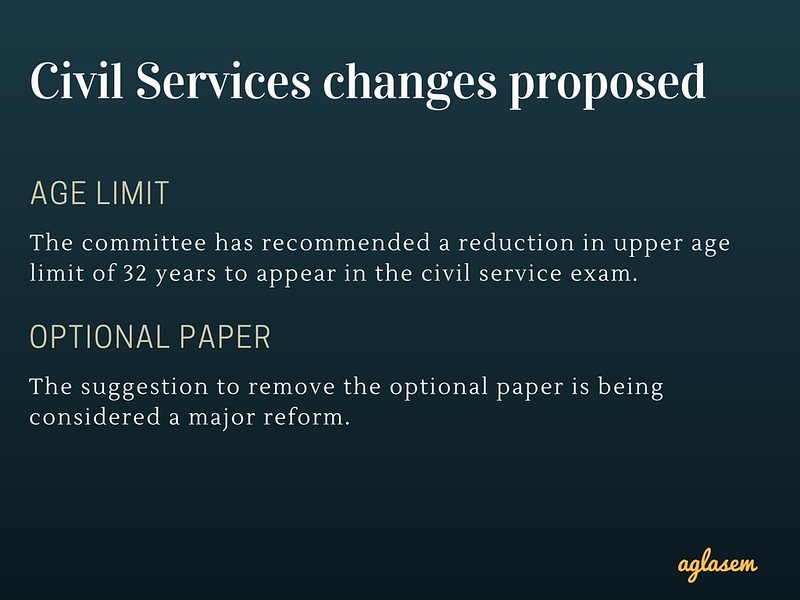 To start with, UPSC may slash the optional paper.

The optional papers are often considered as the major scoring papers since candidates have the option to choose from the subjects they like and know thoroughly. Further, optional papers have a certain formula to surge marks in order to compensate for the non-scoring subjects. However, they make India’s premier government exam unfair. All optional subjects have their own unique scoring standards and scoring in some subjects might be tougher than other subjects.

The proposal to remove the optional paper from the (mains) is being considered as a major game changer and is being received readily by the aspirants as the committee sought their responses online a few months ago.

Next, it is also considering reducing the upper age limit for Civil Services.

One can apply for IAS / Civil Services exam only if they are within age limit. The age factor at the UPSC has been a subject of deliberation for a long time. For many years primarily, the upper age limit was 30 years for the general category candidates while for OBC’s and SC/ST it was 33 and 35 respectively. This was later increased to 32, 35 and 37 respectively in 2014. A reduction in upper age limit is on the cards.

The question that arises now is that when can this change be expected in IAS / CSAT?

The Baswan Committee’s report along with UPSC’s recommendations was received on 20th March this year. The government is expected to implement the alteration only after extending a sufficient window to the prevailing aspirants. However, changes in the pattern can be affected by the UPSC any time without any advance notice and may be given along with the notification

UPSC conducts the Civil Service Exams annually to hand-pick officers into various government services including the Indian Administrative Service (IAS), Indian Police Service (IPS) and Indian Forest Service (IFS) among others. The examination is held primarily in three stages- preliminary, main and interview and is one of the prime competitive exam in the country.

What do you aspirants feel about these recommendations regarding the removal of optional paper from Mains exam? Do you think the recommendation if implemented will be admissible?  The decision to take such a massive step will impact many applicants in future. Do let us know your views on the same in the comment section below.