Home » Competitive Exams » UP TET Result 2017 To Be Declared Today; Get Ready For 68000 Assistant Teacher Recruitment

UP TET Result 2017 To Be Declared Today; Get Ready For 68000 Assistant Teacher Recruitment Uttar Pradesh: Reports suggest that Uttar Pradesh Teacher Eligibility Test Result of exam held on October 15, 2017 is being announced now.  It is with surprising speed that UP basic education board is going through the post-exam processes. While on one hand candidates in many states have to wait for months on end for TET results, candidates of UP will seemingly get lucky by getting their results just two months after exam. Candidates who have appeared for the exam can check UPTET Result 2017 online.

As per government regulations, one who wishes to become a teacher for classes I to VIII must have cleared a teacher eligibility test. In accordance with that, UPTET is held in the state of Uttar Pradesh. There are two separate papers, one for aspiring teachers of classes I to V and another for aspiring teachers of classes VI to VIII. Both are of 150 marks. Those who obtain marks equivalent to or more than cut off score are deemed to have cleared TET; they get certificate certifying the same. 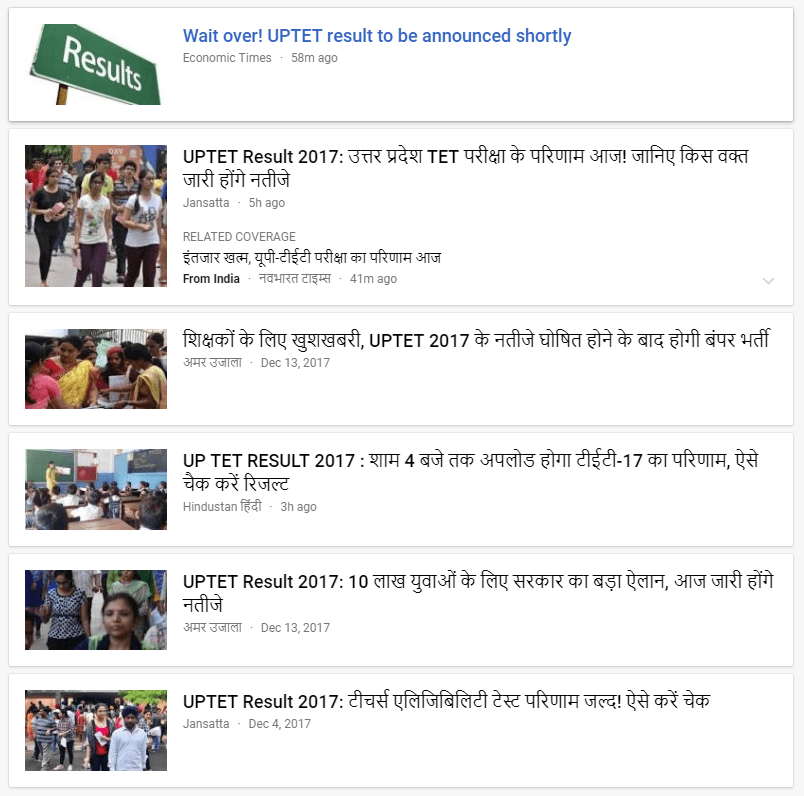 Nearly 10 lakh candidates appeared for UPTET. The actual break up of numbers is 9,76,760 overall; out of which, 3,49,192 were for primary classes teacher aspirants and 6,27,568 were for upper primary teacher aspirants. It is understandable that each one is waiting for the result with bated breath. The official website for TET is upbasiceduboard.gov.in and that is where result is going to be announced.

Date of result declaration has been speculated to be December 15, 2017, by several news channels following UPTET officials closely since its notification. Upon official announcement, candidates can visit the official website and click on the results link. One will have to log in with registration number and password to check result.

It will be a matter of great joy and pride for those who clear the exam. They should start gearing up for various teacher recruitment that UP government is going to come up with. To start with, the Directorate of Basic Education has reportedly proposed or approved recruitment for 68,000 assistant teachers. The same is supposed to be officially notified in December 2017. If the proposal goes through then there will be a teacher recruitment test. Apart from making one eligible for the teacher recruitment test, it is likely that 25% weightage will also be given to TET score. These positions are being offered in government primary schools.

Do you think UPTET Result 2017 will be announced on December 15, 2017? How are you planning to prepare for teacher recruitment test? Share your views and thoughts in comments below.

123 Universities to drop the term ‘University’ from their names: UGC Orders