More 10 Lakh students got troubled for they will have to reach out to the exam centres once again. The UP Police Constable Bharti 2018 exam for the second shift which got conducted on June 18 and 19, 2018 is now declared canceled. A lot had happened with the UP Police Constable 2018 exam and this time candidates had to knock the doors of the court to get justice. The outrage was already growing since a series of events happened during the procedure.

To recall, the fake news of the exam itself getting canceled was spread among the students and candidates were shocked for the moment. Later on, it was found that the news is fake and the exam will be conducted on the dates as specified in the earlier released official notice. And now, the exam got conducted to get canceled. However, this problem is being faced by the students who had appeared for the exam conducted in the 2nd shift. 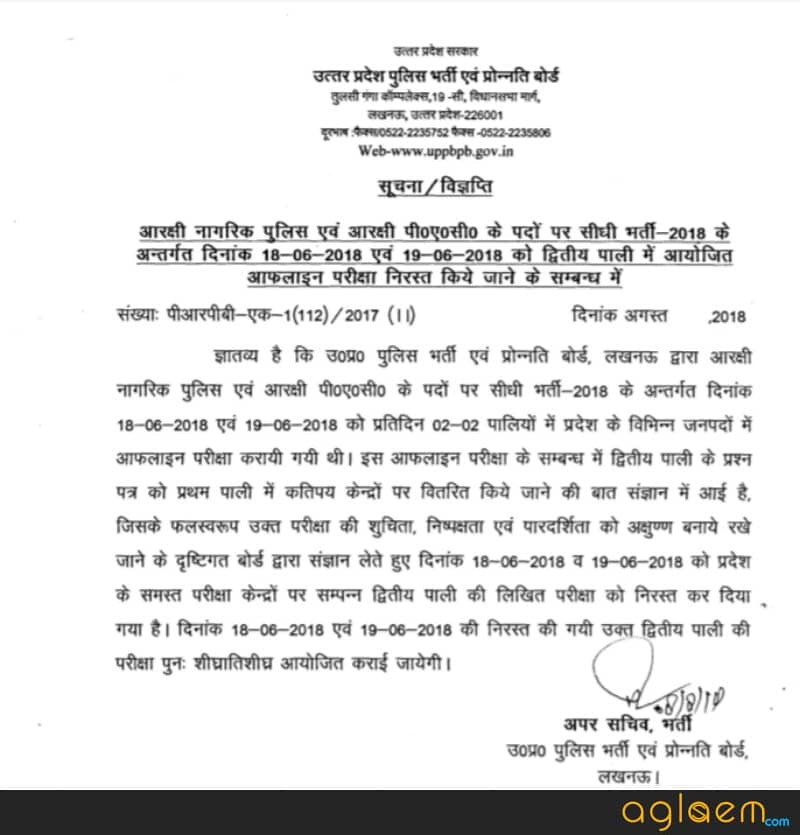 According to the research, it was found that out of the total 75 exam centres for the UP Police Constable 2018, the exact same question paper of the 1st shift was distributed in the 2nd shift at about 68 exam centres. Thus, such an action didn’t come uninvited.

Students who have appeared for UP Police Constable Bharti 2018 Exam in first shift do not need to appear again.

It must be cleared to the students that the exam has got canceled only for the 2nd shift. UP Police Constable Bharti 2018 will be conducted only for the students who have submitted their Application form and were present on the exam day. The exact exam date has not been announced so far by the Board. But the speculation is that the exam will be conducted for the second shift on October 14, 2018. But, it is advised that the candidates wait for the official notice from the board.

However, the official website of Uttar Pradesh Police Recruitment and Promotion Board has been a quick help source since they have given expeditious clarity on all the rumors that had spread like a forest fire. Now that the students have been officially notified, the students who had appeared for the UP Police Constable Bharti 2018 in the second shift must buck up once again for the re-exam.

It is yet to be cleared if the students have to download the re-exam Admit Card or not. The students must stay updated with the latest happenings by regularly visiting the offcial website.