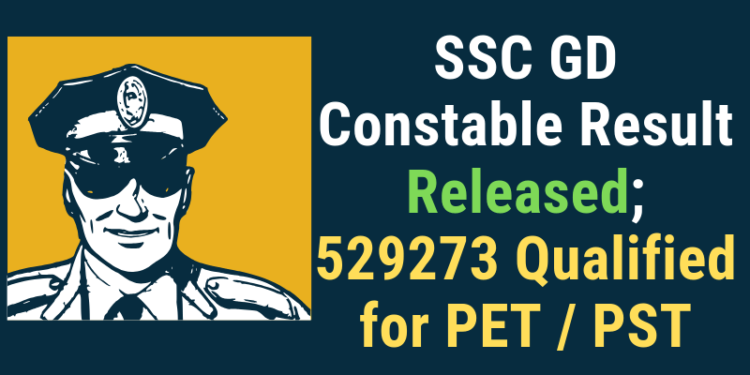 The Staff Selection Commission (SSC) has declared the SSC Constable GD Result 2019 on June 21, 2019. The result has been released online at official website ssc.nic.in for the General Duty posts in forces like CAPFs, NIA, SSF and also for Riflemen (Assam). As per the SSC GD Constable result write-up released, about 529273 candidates have qualified the test, and a total number of 30,41,284 candidates appeared in the said examination.

The result for SSC GD Constable 2018 can be checked from the official website. On the homepage of the website, click on the “Result” tab. In the next screen, the candidates have to click on the Constable tab and then click on the relevant link for checking the result. It has been released in the pdf format and consists of a candidate’s roll number, name, and category.

The Commission received representations from the candidates regarding the provisional answer key. The objections submitted by the candidate were carefully examined and necessary corrections were done in the tentative answer key. The Final Answer Key has been used for evaluation of the performance of candidates in the Examination.

The candidates who have qualified the Computer Based Examination conducted from February 11 to March 11, 2019, are eligible to participate for Physical Endurance Test (PET) and Physical Standard Test (PST). The candidates have been shortlisted for PET and PST on the basis of normalized marks
scored by the candidates in the CBT.

In the case of two or more candidates obtained equal marks in the CBT, their tie is resolved by applying the rules like firstly their tie is resolved by considering the total marks in Computer Based Examination. If there is still a tie, then the Marks in Part-A of Computer Based Examination are considered. Furthermore, if the tie still remains, marks in Part-B of CBT are taken into consideration to break the tie. If the tie is still not resolved, then the date of birth, with older candidates is placed higher. If none of the above works, then the Alphabetical order of names (starting with the first name) are given preference.

If there is any discrepancy with respect to the candidate’s data/ result, it is advised that such candidates should bring it to the notice of the Commission by July 31, 2019, with a copy of the printout of the Online Application Form. Now, remember that the representation submitted after 31 July will not be entertained.

The SSC GD Constable recruitment exam was conducted to fill Constable (GD) in CAPF, NIA, SSF, and Rifleman (GD) posts in Assam Rifles. The Commission had conducted the exam in the computer-based mode in February-March. A total of 50,066 vacancies have been announced for male candidates whereas 58373 for female candidates.