Staff Selection Commission (SSC) is one of the most prominent recruitment bodies of India. Every year SSC conducts various examinations and millions of candidates apply for them. One of the most sought after examinations, conducted by the Commission, is Combined Higher Secondary Level (CHSL). It is held in three tiers and the tier 1 for SSC CHSL 2017 was held from January 7 to February 8, 2017. The second tier of the exam has also been conducted on July 9, 2017.

The result for SSC CHSL Tier II 2017 is awaited. As per the earlier released notification, the result was supposed to release on 25 Oct 2017. However, the conducting body has revised the exam dates for most of the examination. Now, the announcement of result will be done seven days prior to the due date, on 18 Oct 2017. 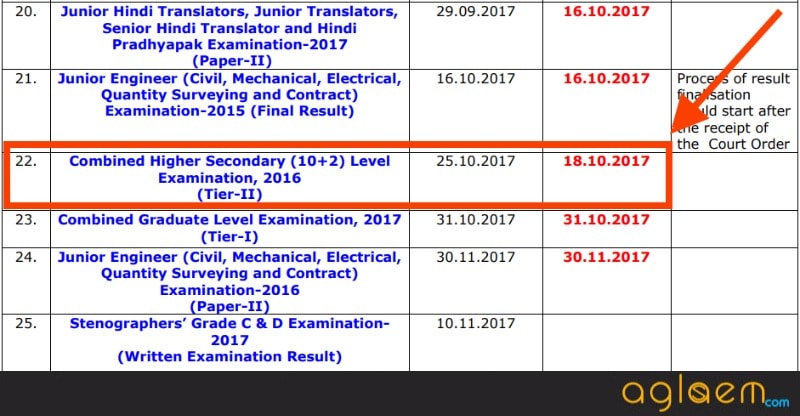 The marks of CHSL Tier II will be announced later on. With the result, the candidates will also come to know the minimum qualifying score in the examination. Last year the cutoff for the exam went upto 61, 60, 64, and 65 for SC, ST, OBC, and UR category candidates, respectively for DEO. In all, 6446 candidates qualified and out of it 887 were from SC category, 598 from ST category, 2713 from OBC category and 1240 were from UR category.

The cutoff for Postal Assistant/ Sorting Assistant/LDC was 33. It was same for the candidates belonging to all the categories. Total 43856 candidates qualified and of these, the highest number of qualifiers were from OBC category, 20332. Under UR, SC, and ST category 11290, 5871, and 2834 candidates qualified, respectively.

This year, a total of 30,57,993 candidates appeared for SSC CHSL 2017. Yet, only 53201 candidates qualified for the descriptive paper, i.e. Paper II. It is expected that the cutoff will be approximately the same as that last year. The candidates who will qualify tier II of the exam will be called for the Typing Test/Skill Test, which is basically the third tier of the exam.

The Typing and Skill Test will only be a qualifying examination. The score secured by the candidates in these will not be considered for the preparation of the final merit list. The Data Entry Speed Test will be held for the candidates seeking recruitment in DEO. The candidates will be required to type 8000 key depression per hour.

On the other hand, Postal Assistant/Sorting Assistant LDCs and Court Clerks aspirants will be required to qualify the Typing Test. The exam will be held in the English and Hindi language. In the English language, the candidates will have to type 35 words per minute. Whereas, the aspirants of the Hindi language will be required to type a minimum of 30 words per minute.

The final merit list will contain the Roll Number, Category, and Name of candidates who will be called for the document verification round. Last year, a total of 12,991 were selected for DEO and 16,609 for Postal Assistant/ Sorting Assistant/Lower Division Clerks. The cutoff for DEO SC, ST, OBC candidates is 7% and for UR candidates it is 5%. The cutoff for LDC and PA/SA was 10% for SC/ST/OBC candidates and 7% for UR category candidates. We wish good luck to all the candidates who are waiting for the result. We hope you qualify the examination with flying coulours. If you have any question or query, you may leave a comment below.