Staff Selection Commission (SSC) conducts Combined Higher Secondary Level Examination (CHSL) to recruit candidates for the post of DEO, LDC, Postal Assistant, Court Clerk, etc. SSC CSHL (10+2) 2016 started with Tier 1 which was held from January 07 to February 08, 2017. The result of Tier 1 was announced on June 01, 2017, and the qualifying candidates appear for Tier 2 on July 09, 2017. Now, on October 13, 2017, the Commission has released the result for SSC CHSL Tier 2 as well.

The Tier 2 result has been announced through a PDF. It contains the Roll Number, Name, and Category of the qualified candidates. To check the result, visit ssc.nic.in. Then seek the result link under the ‘Latest News’ section. Use the image below for reference. The candidates can also access the result by clicking here. 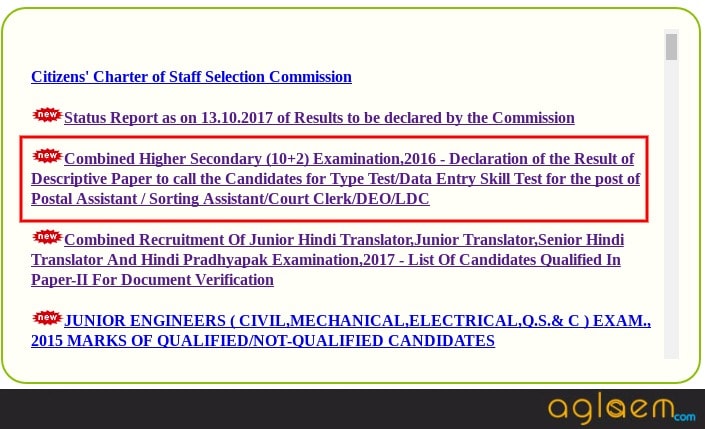 Successful candidates will now be called for Skill Test and Typing Test. The schedule for the SSC CHSL Tier 3 will be announced soon. The Skill Test is to be taken by the DEO aspirants, whereas, for other posts, the candidates are going to appear for the Typing Test.