Youth of India sleeping on roads???
Demanding only fairness and transparency in SSC exams #sscscam pic.twitter.com/qFZduIl3PJ

On Wednesday, twitter was flooded by #sscSCAM tweets. While some protesters are raising their voice on the streets, others are showing solidarity for the same through social media. Lakhs of people have come together to demand justice.

Here is all that led up to this protest.

Issue #1: In SSC CGL 2017 Tier I, shifts before August 15 were more difficult than shifts after that date.

Conclusion: Still no clarity given on why certain shifts were tougher.

What happened: A few minutes prior to the start of Math exam on February 21, an FB page that caters to SSC aspirants posted pictures they had received in inbox which shockingly showed questions with answers of questions of the Math paper. 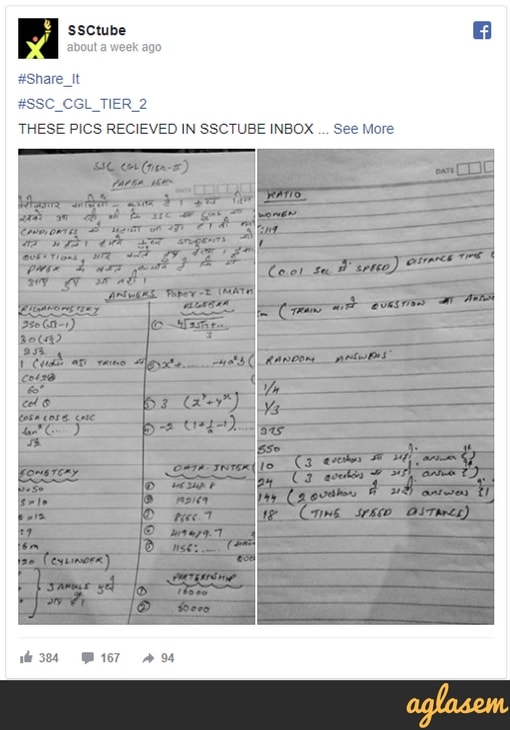 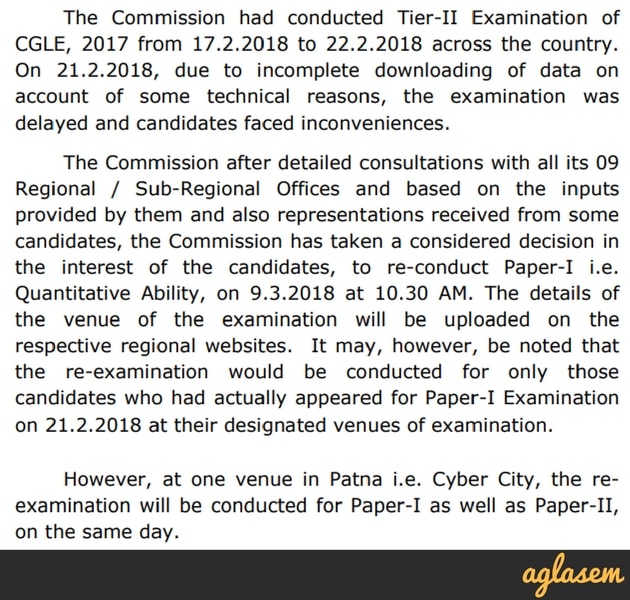 What happened: The image shows a computer screen with teamviewer (a software that allows remote access to other desktops) opened on SSC CGL exam. The desktop has chrome, firefox, and other browsers in task manager showing that someone, from home or other personal space, is accessing SSC CGL exam. It was not possible for the pictures to have been taken in a centre as phone/cameras are not allowed in centres at all. 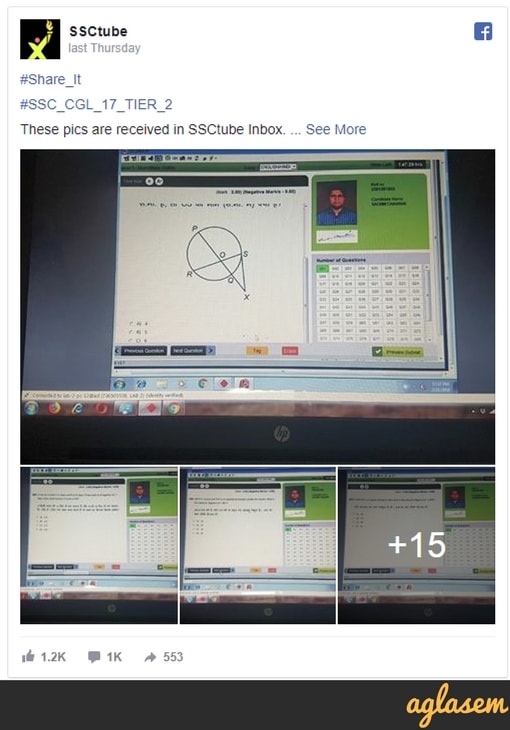 What SSC says: On February 23, SSC issued a statement saying that the images are “bogus” and “baseless”. 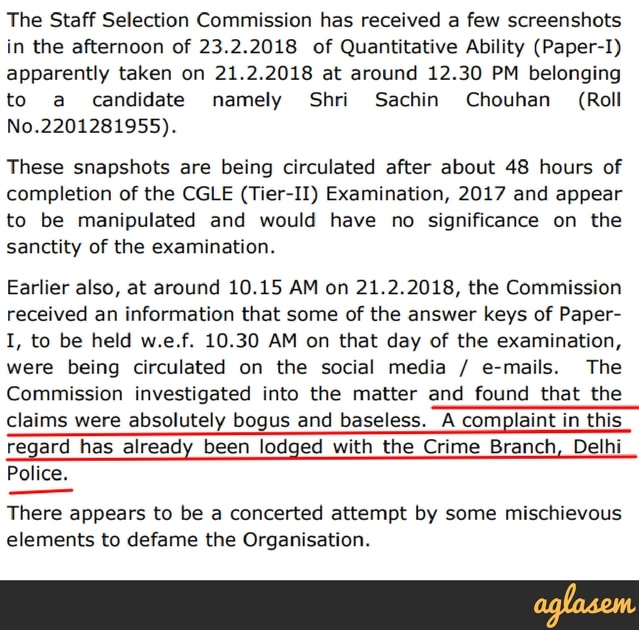 What happened: On February 17, 2018, some candidates at a centre in New Delhi reportedly found a chit of paper with notes scribbled on them. On arrival of authorities to look into the matter, the situation got out of hand and the paper was cancelled.

What SSC says: On the same day, the Commission issued a statement saying that in fact their representative was mistreated and manhandled by candidates. 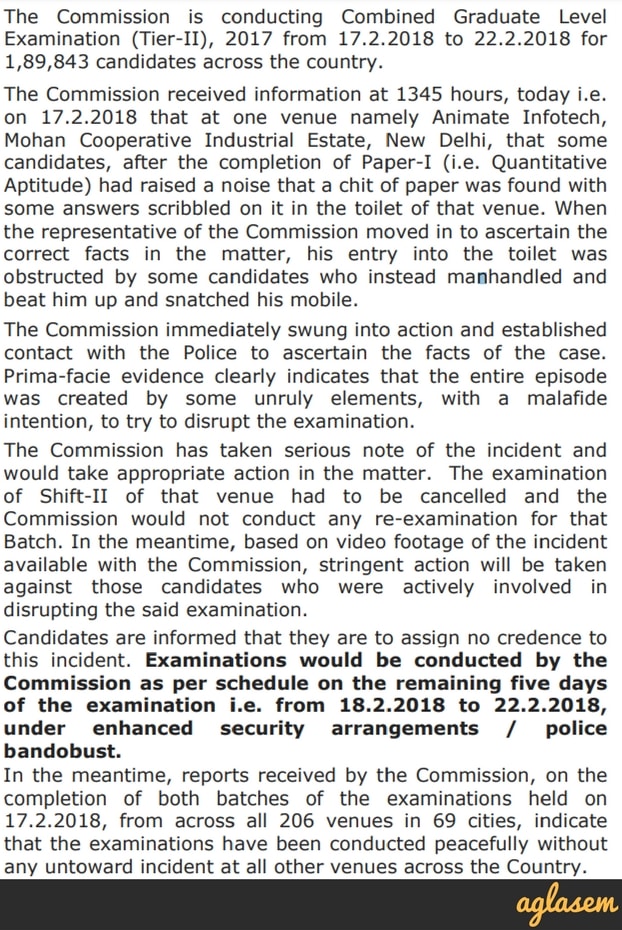 Government job aspirants have been voicing their concerns in the alleged malpractices of SSC exams for a long time. But with so many issues happening in a single exam, their patience has probably been tested too far.

From polite requests on email and social media, the aspirants have now come out in open, on the streets.

The commission, as a result, published two notifications back to back. The first one, dated February 27, 2018, states “A delegation of three candidates met the undersigned (Ashim Khurana, Chairman) and presented a representation in this regard. The Commission has taken note of the issues raised in the representation and subject to the submission of the requisite supporting documentation, the Commission would have the matter enquired into and take an appropriate considered decision in the matter.”

The second one, dated February 28, 2018, says “It has been brought to the notice of the Commission that the present agitation going on since yesterday near the Office of the Commission by some candidates of CGLE (Tier-II) 2017, is being actively instigated and sponsored by two Coaching Institutes/ agencies with vested interests. The Commission had agreed to meet the representatives of the agitating group yesterday and during that meeting, they were directed to furnish substantive evidence in support of their allegations. They have been given time upto 6 PM today to represent their case. Thereafter, the Commission would take an appropriate considered decision in the matter.”

Protests are, in no well-intentioned person’s life, something they want to get into. Whenever a protest happens in which the matters of a larger group are involved, various segments do get involved; but is that really the major issue here?

February 28, 2018, was day 2 of the protest. How long will this have to go on and what will be the conclusion? Will there be any change?

Staff Selection Commission (SSC) is an Indian organization under the Government of India that recruits personnels in various ministries and departments of GOI in Subordinate offices.

One of the exams it conducts is the SSC CGL or the Combined Graduate Level exam.

Only 8089 candidates will be selected through the CGL exam for various posts. The aspirants understand the competition.

The SSC has time and again issued statements conveying that it holds exams for crores of candidates and that delays in results are due to the time taking process involved in evaluation of so many papers, and decision-making processes involved.

The candidates understand that SSC exams are held on a massive scale. They understand that they are tough exams to crack. For that, they spend day and night preparing for the exam. All that they now request the authorities is to respect their hard work and provide a fair and transparent ground to be judged and evaluated.

Is that asking for too much?

What are your views on the #sscSCAM? What do you think should be done now?

Prakash Javadekar Confirms NCERT Syllabus to be Reduced to Half