Government job aspirants have given a huge response to recently notified SSC CGL 2017. A staggering 30,26,598 have submitted online application form.

Staff Selection Commission closed CGL application form today, on 19 June 2017 at 5 PM. From 16 May to 19 June, applications came flowing in at ssconline. However, it is worthy to note that this number is lesser than last time. 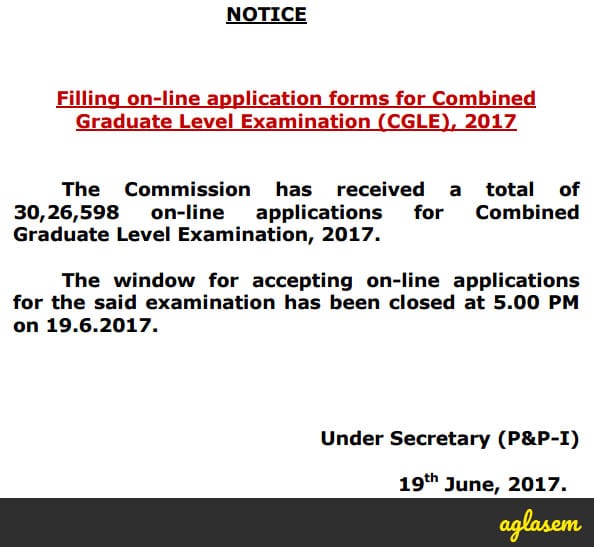 Comparison of applicants for SSC CGL with last year

For Tier 1 examination held in 2016, number of applicants was 38,04,000. What has probably caused this drop in figures is difficult to pin-point. Though it might be that there have been several good government job recruitment in intervening time, where several aspirants have been offered positions, thus bringing down numbers for SSC CGL 2017. Other reasons are open to speculations.

Initially last date to apply was 16 June 2017, which was extended by three days as candidates could not access online application form. There were some issues in server that was causing trouble.

When Tier 1 result was announced two years ago, number of test takers reported was 17,86,047. It is evident that since that year, numbers have doubled.

Computer based exam of SSC CGL 2017 is from 01 to 20 August 2017, as per notification. There will be 100 questions divided among General Intelligence Reasoning, General Awareness, Quantitative Aptitude, English Comprehension.

To beat this competition, hard work and dedication are key factors in exam preparation. It is difficult, but surely not impossible to clear Combined Graduate Level exam. Best wishes to aspirants!