As per the initial notice result of SBI Probationary Officer (PO) 2017 Main examination was to be announced on June 19, 2017. However, through the recent notice the Bank has informed that it will not be declared on the due date. The Bank has not provided any justification or a new date for the announcement and has left the candidates mid-air. 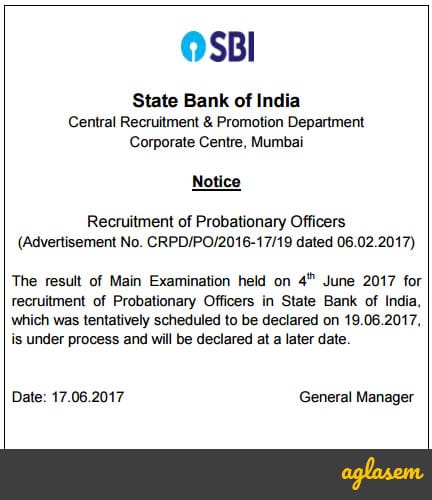 The postponement in the result might push back the entire recruitment procedure. This year, there are 2313 vacancies for the Probationary Officers. The qualifiers of the SBI PO Main exam will be called for the Group Discussion and Interview Round. The GD/PI will begin from July 10, 2017.

After the interview, the Bank will publish the final merit list. It will be uploaded on August 05, 2017 The candidates who will make to the final list will be called for the training and final recruitment.