Another huge recruitment by India Railway, RRC Group D 2019 for 103769 vacancies, has been announced. The RRC Group D application form 2019 has released today, on March 12, and all the candidates who have qualified class 10th or ITI can apply for it. The link to apply for Railway Group D is only available online. Candidates who are interested in applying for the recruitment can refer to this news for RRC Group D Application Form 2019 Live Updates and to know when the form is releasing, what is the fee, if there is any delay in the release, etc.

| 12 Mar 2019 (1): The application form for RRC Group D 2019 will release today. On behalf of RRCs, RRBs will host the applications on its website. Offline forms will not be available offline and the candidates who applied for RRB Group D 2018 may also apply for CEN 01/2019.

| 11 Mar 2019: Late evening, the official notification for RRC Group D 2019, CEN RRC 01/2019, was uploaded on the official website RRBs and RRCs. The number of vacancies, selection process, and other details has been announced via it. RRC Group D Recruitment 2019 selection will be done on the basis of CBT, followed by PET and Document verification.

| 23 Feb 2019: Indian Railway released the first notice for RRC Group D 2019. In it, the Railways announced that 1.3 lakh vacancies for RRB NTPC, RRB Paramedical, RRB Ministerial, and RRC Level -1 will be announced. Earlier, the candidates were confused about Level-1 but soon it became clear that another Group D Recruitment was on its way. 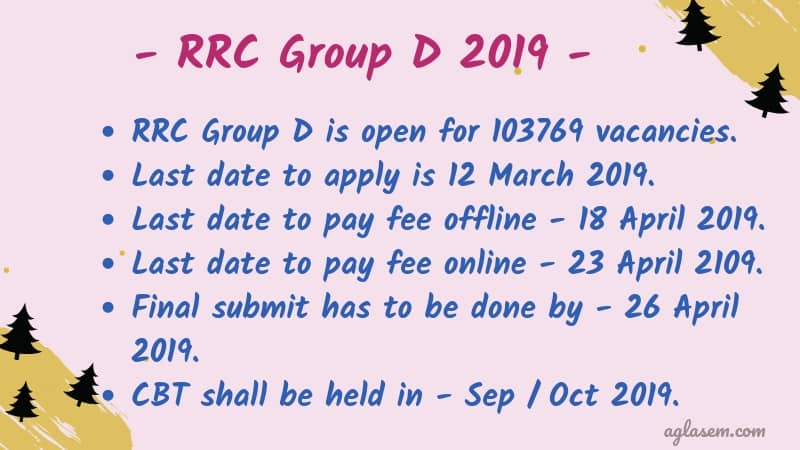 The list of all the 21 RRBs, with the websites, is given below. The link to apply shall be common in all the websites. However, once choosing the respective RRB, the data will be saved with each RRB accordingly.