Railway Recruitment Boards (RRBs) are allowing candidates to submit queries on rejected applications. However they are not providing any modification link. Candidates from all over India are requesting to allow them to do that to be able to appear in the exam. 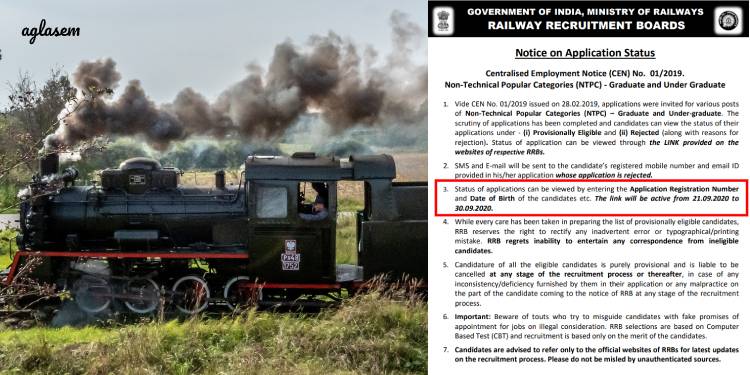 The last date to check RRB NTPC application status for CEN 01/2019 is today, i.e. September 30, 2020. RRBs have not specified the time at which the link will be deactivated. Hence candidates who are yet to see their status should go to rrbonlinereg.co.in and check at the earliest.

Help desk to submit queries on rejected status are also available as of now. Railway Recruitment Boards have not provided the last date or time till which it will remain open. Therefore those who have to submit any complaint should also do so as soon as they can.

As far as the latest news on RRB NTPC exam date is concerned, the first stage computer based test is scheduled to start from December 15, 2020. The exam start date was notified vide a press release on PIB earlier this month.

First, it is expected that RRBs will publish notice on what action they are taking on queries received from rejected application status candidates. If they look into those complaints and change the status of any candidates, then they would release the final application status.

Will RRB NTPC Exam Date 2020 be Delayed If Modification Link or Revised Status Is Released?

Candidates are worried that if RRBs are forced to provide a modification link (because many candidates are demanding it), or have to update status, then exam date can be delayed. However that is not necessary.

There are still more than 2 months to go for the exam date. Even if RRBs have to provide a revised application status, or have other events like modification of forms, then also there is enough time for the exams to start on time.

There are only two things that may derail the exam schedule.

First is the finalization of Exam Conducting Agency. There is still no official announcement on who has been finalized as the ECA. As far as last notifications show, the process is still ongoing.

Second factor that can affect the exam dates is the pandemic situation. As of now, many national level exams are already taking place despite the growing numbers of cases. However railway exams involves more than 1 crore candidates and arrangements for such require nationwide cooperation between departments. Even special trains have to be run at such times to ensure candidates can travel to exam centers on time.

As per reports, the forms of thousands of candidates from each zone have been rejected due to invalid photograph, signature, duplicate form, and other such factors. The demand for modification link has been put forward not only by RRB NTPC (CEN 01/2019) candidates, but also RRB Group D (RRC CEN 01/2019) candidates.

SC Verdict on UPSC Exam 2020: IAS Prelims Not Postponed; Special Arrangements for All and Concessions for Last Attempt