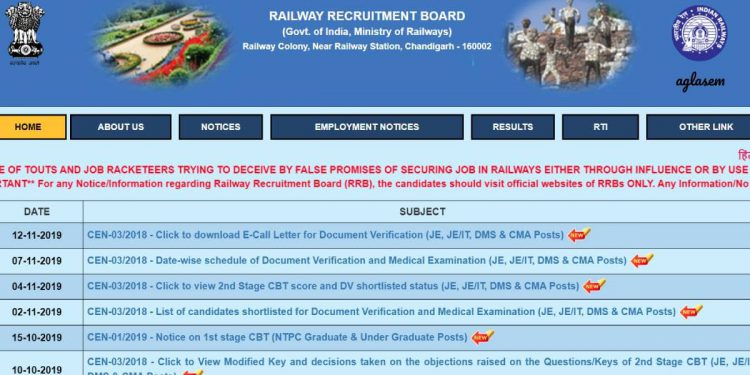 Railway Recruitment Board (RRB) Chandigarh has released the call letter for document verification and medical examination for the 1,535 candidates who qualified as per RRB JE CBT 2 result, at rrbcdg.gov.in. DV and ME will be held from November 19 to December 24, 2019. There are also going to be two block dates, December 26 and 27, 2019.

There are a total of 996 vacancies in RRB CDG. Candidates who are called for DV, ME, and are able to show all required documents, as well as clear the medical rounds, will be included in the empanelment list on the basis of merit and choice.

For now, to download the admit card, candidates are required to go to rrbcdg.gov.in, and there click “CEN-03/2018 – Click to download E-Call Letter for Document Verification (JE, JE/IT, DMS & CMA Posts)”. Doing so opens up chandigarh.rrbonlinereg.in, where, the link “e-Call letter for Document Verification & Medical Examination”. On the next page, only qualified candidates (that is who had cleared cut off of JE CBT 2) can enter registration number, date of birth, and upon login shall get the admit card.

In extreme cases, candidates can attend the process on the two block dates at 10 am. The reason behind not being able to attend on the assigned date has to be supported with documentary evidence. RRB says “The reason for failure to report in the regular document verification should be supported by documentary evidence that the candidate appeared in a University/Govt. examination or due to his/her personal sickness. No other reason for absence will be considered. Requests for change in Block Dates will not be entertained. Candidates absent even on the Block Dates will forfeit their candidature for any post of CEN-03/2018.”

Venue for DV is Railway Recruitment Board, Railway Colony, Near Railway Station, Chandigarh. And time for all dates except the block dates, is 9 am.

RRB Chandigarh as well as all other RRBs are also soon going to announce the exam dates for RRB NTPC (CEN 01/2019), and RRB Group D (RRC CEN 01/2019). After that, for NTPC recruitment, the board will first publish application status. Whereas for group D, where status is already available, exam city intimation will be provided.

Railway Recruitment Board Chandigarh is one of the twenty one railway recruitment boards in India. Initially the railway service commission, it was renamed to RRB in 1985. Since the past four years, the office of the board is in railway building at Railway Colony, Near Railway Station, Chandigarh – 160002.