Railway Recruitment Board (RRB) has released a notice regarding the RRB ALP Aptitude Test dates and Mock Test link. The Computer-Based Aptitude Test is scheduled to be held on April 16, 2019. The test is conducted for only those students who have applied for the post of Loco Pilot. The admit card will be released 4 days prior to the exam. An intimation will be sent via SMS or Email to the candidates regarding the Exam City and Call Letter.

To qualify the aptitude test, candidates have to obtain 42 marks in each of the tests batteries. In this round, the question is asked only in Hindi and English language. There is no negative marking in the aptitude test. It is mandatory for the candidates to produce the Vision Certificate in the prescribed format as per the A1 medical standard. Candidates qualifying the aptitude test will be then called for the Document Verification.

The Board has laid guidelines and RRB ALP mock test link for the candidates on the official website of the RRB, 21 in number and of RDSO. The link of the mock test will be live from April 10 to April 16, 2019. After the completion of the computer-based aptitude test, the process of document verification will start from May 2019. 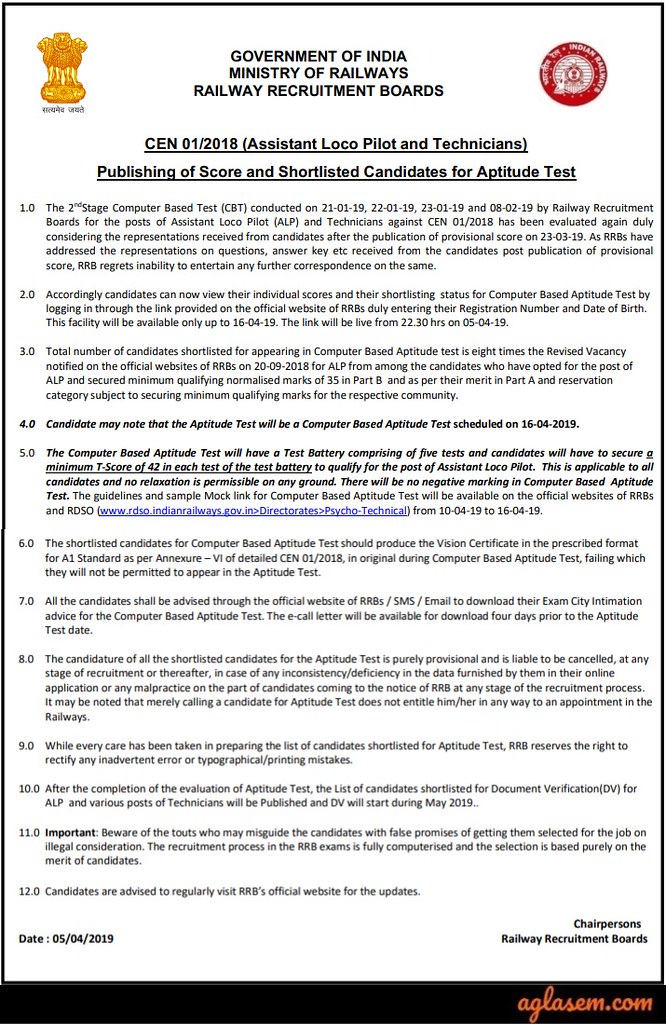 Applicants who have applied for the post of Technician will be called for Document Verification directly after the CBT stage 2. Around 50% more candidates are called for this round for the standby list. In this round, documents can only be presented in either Hindi or English. Candidates have to carry original as well as two sets of self-attested photocopies of the documents on the specified day. Failure of the submission of the relevant documents can lead to the cancellation of the candidature.

The candidates called for the DV round are required to pass the Medical examination conducted by the Railway Administration. This round confirms that the candidate is fit to carry out the duties concerned with the post. In case a candidate fails to pass the medical exam then, he or she is not eligible for the final appointment.

For latest updates about RRB ALP, Subscribe to Aglasem News!!

Why is agility critical for a computer science engineer? Explains Anurag Goswami Of Bennett University

Why is agility critical for a computer science engineer? Explains Anurag Goswami Of Bennett University