Home » University & Colleges » NIRF Ranking 2018 To Release In March, Slash Funds For Colleges That Do Not Share Data: MHRD

NIRF Ranking 2018 To Release In March, Slash Funds For Colleges That Do Not Share Data: MHRD The NIRF was approved by the MHRD and launched by Honourable Minister of HRD on September 29, 2015.

This framework outlines a methodology to rank institutions across the country. Also, it draws the overall broad understanding to identify the broad parameters for ranking various universities and institutions. 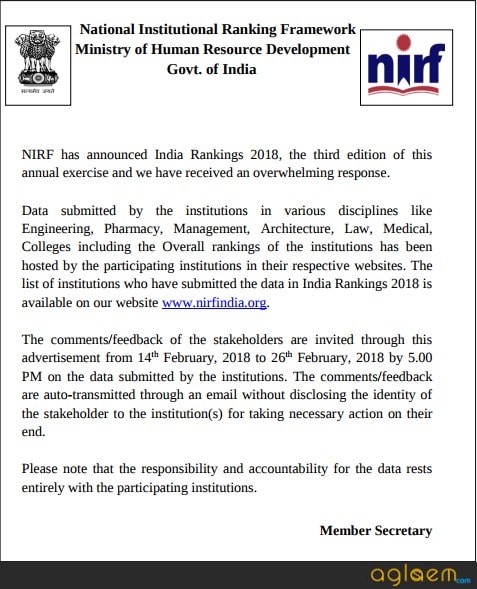 It has been noticed by the MHRD that a number of educational institutions have not yet shared mandatory data required for the ranking exercise. In this regard, the HRD ministry can ask the UGC to act against institutions if they don’t provide mandatory data under the National Institution Ranking Framework and slash their funds.

The data submitted by the institutions in various disciplines like Engineering, Pharmacy, Management, Architecture, Law, Medical, Colleges including the Overall rankings of the institutions has been published by the participating institutions at their respective websites. The list of institutions who have submitted the data in NIRF Rankings 2018 is also available on www.nirfindia.org.

It is compulsory for all the central government-aided institutions to apply for the NIRF. If the sources are to be believed, as many as 4,734 institutes are participating in the exercise this year, about 1,525 more than last year.

Earlier, a number of institutions including St Stephen’s, Hindu College, Sri Venkateswara College, AIIMS and NIFT earlier decided to apply for the 2018 ranking and even submitted their application forms to this effect. However, St Stephen’s and LSR may not be included in the list unless they share faculty-related information which is one the mandatory parameter to assess the performance of colleges in the national ranking system.

Factors that are considered for NIRF Rankings

Basically, there are few parameters on the basis of which ranking is done, namely, Teaching, Learning & Resources, Research and Professional Practice, Graduation Outcomes, Outreach and Inclusivity, and Perception.

Some colleges fear that they will be ranked lower than last year. This will further put them at a disadvantage. However, despite this fact, the Ministry is still giving them a chance to apply.

In 2017, the LSR College ranked sixth and St Stephen’s did not participated in the NIRF Ranking. The Former Delhi University vice-chancellor Dinesh Singh made a revelation that most of the information related to the faculty is available in the public domain and can be accessed under the Right to Information Act. So, why both the Universities are reluctant to share such details?

The principal of both the Universities have not responded yet on this and the Ministry also have not received any positive response from them.

The UGC releases funds to universities every year. So, it is advisable to all the Universities who have not yet submitted the necessary information for the ranking to do it soon or the Ministry might take appropriate action against them.

RRB Assistant Station Master Recruitment 2018: Notification to be out soon