Oops! MCI did it again. The dirt on all the corrupt activities and blunder that Medical Council of India has done so far has not even settled. But, it is inviting flak with hands stretched out. After 2016 fiasco of reviving NEET just two days before the due date for AIPMT, once again the Council has come up with another “beneficial” strategy to improve the medical education standard in India. It has proposed that the Open Board students should not be allowed to appear for NEET 2018 as they will not be able to match the level with the regular board students.

Without haste MCI ran over medical dream of thousand of NIOS students but how does it justify the “level”? Is it to be on par with the CBSE Board student and know all the NCERT by heart or to have the stamp of state board? None matters when hard work and resolute persistence are put into force. Then, how can MCI judge students’ caliber on grounds of Board they are studying from.

The official release for banning NIOS students from taking the examination. 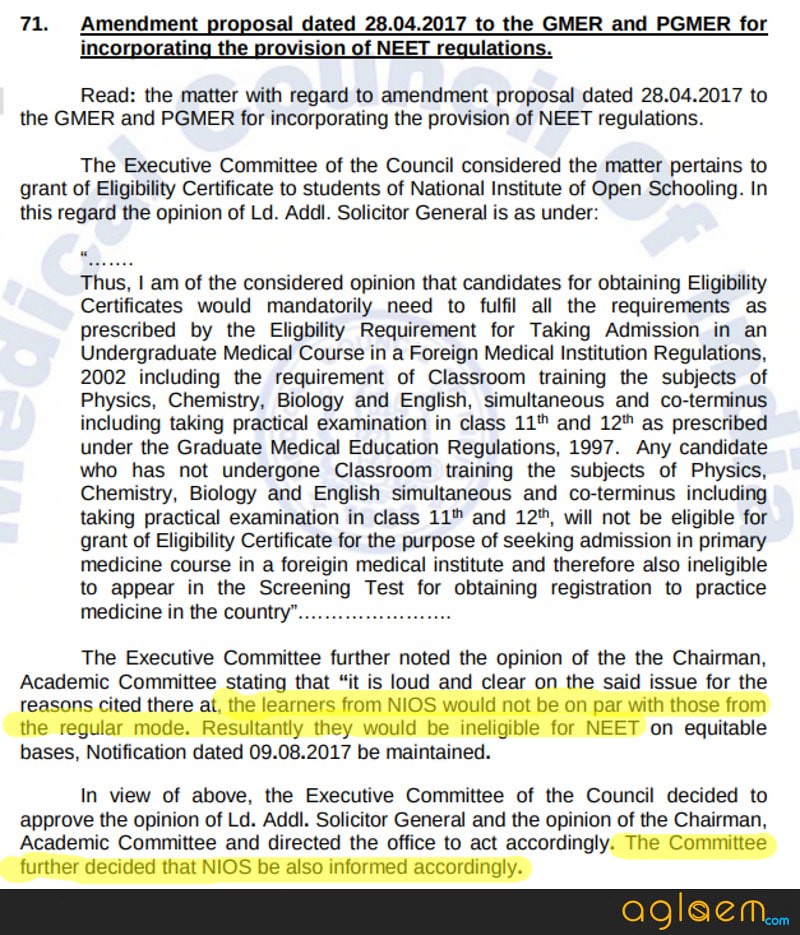 If for instance, MCI is to be considered right, even then there are numerous solutions to the issue. Firstly, MCI could have coordinated with NIOS in time and decide a way out. Not all the state boards are equally easy or difficult but the solution is not to exclude the state, rather raise the standard. NIOS could have implemented the required amendments and taken care of the matter.

What runs beneath cannot be judged. Hence, let’s give a benefit of doubt to the Council. Then too I would like to know, how letting these students appear for the exam could be an adverse step. If indeed the student is not at par with the rest, then he will not qualify the exam and will be naturally delimited from the process.

If students are clearing NEET cutoff and are qualifying all the levels of assessment then they are worthy of the prize and if not then there is a major flaw in the evaluation process. In both the cases, the student should not be barred from their dreams because they deserve it and the flaw is the system’s to be corrected.

This can be the last year before National Medical Commission takes over. The Council is itself to be blamed for the depleting standard of medical education that it intends to raise now. There is no smoke without fire, the allegation of bribery, unethical practices, forged seat intake, and so much more but similar is switched with it and this is the cause why the medical industry is filled with doctors who fail to perform at various levels.

There are issues with the school education boards as well. Nothing is perfect! But the solution is not to debar the students. Why is it always the student who is suffering all the time?

Even if one deserving candidate is banned from achieving their dreams, it is the loss of the entire nation.

The thought process behind such proposal is sad. It is a human tendency to generalize and very easily we misjudge the students of NIOS to be with inferior mental faculties. That is not true all the time, there are those who learn from mistakes and thrive to be better, there also those who choose open board due to personal issues. We teach our children to not judge a book by its cover but then we keep on grading them at every stage of life, producing a regressive race.

NIOS is India’s largest open schooling organization, which provides education to more than 13 lakh Secondary and Senior Secondary students. The purpose of establishing it was to extending open learning facilities. Then, why leave it behind.

The 2012 ruling made by the MCI Board of Governors clearly states that NIOS students will be eligible to pursue medical admissions.

As per the letter sent by the MCI to the NIOS in 2012, “if the requirement of Graduate Medical Education Regulations regarding eligibility criteria for admissions to MBBS course are fulfilled by the students appearing in 10+2 examination conducted by the National Institute of Open Schooling, they may be considered eligible for admission to MBBS course”.

The National Eligibility-cum-Entrance Examination (NEET) is the only medical entrance examination which is held for admission to MBBS and BDS across India. So, NEET is the only hope for candidates studying from Open School to achieve their medical dream.

Taken aback by the decision, NIOS has also written to HRD to intervene and demand MCI to revoke the decision. Prakash Javadekar, HRD Minister, and JP Nadda, Union Health Minister, will meet on Wednesday to disscuss the matter.

There is a little hope for NIOS students as the NIOS Director of Student Support Services to whom the MCI letter in 2012 was addressed, Dr. Sanyam Bhardwaj, is currently the Joint Director of the NEET Unit at the CBSE. However, the weather they will be allowed to appear for NEET 2018 will only be on the basis of the outcome of the meeting between the two Union Ministers.

Do you think it is right to exclude NISO students from NEET 2018? If this is the only solution? Or is MCI being a bully that it has always been and is taking an unjust step? Will excluding a section of candidates improve the standards? Speak out your mind, let us know what you think in the comment section.