The Medical Council of India (MCI), through an official notification, has announced the age limit, educational qualification requirement, reservation for physically disabled candidates and cut off marks to qualify NEET 2018. The applicability of age limit is one of the most concerning matters for the medical students and as per the notice, it is applicable.

This means, to appear for NEET 2018, the student should have completed the age of 17 years on or before December 31st of the year of admission. The upper age limit for candidates is 25 years, as on the date of examination, i.e., May 06, 2018. There will be a relaxation of 05 years for candidates belonging to SC/ST/OBC category. 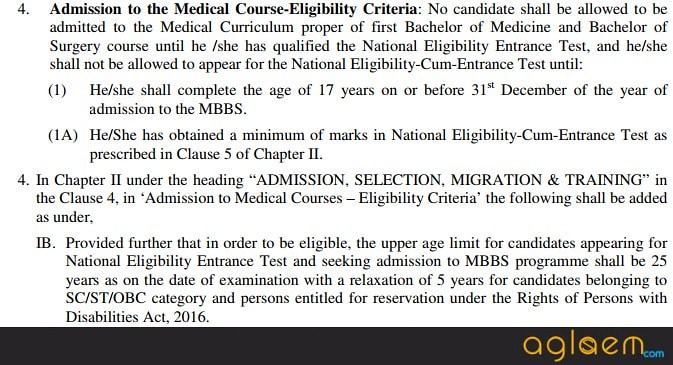 A year ago, the board implemented a lower age limit of 17 years as well as an upper age limit of 25 years on NEET applicants. However, the Board had to remove upper age bar because as per it the third attempt of few candidates was being wasted (since there is also a 3 times attempts limit).

For NEET 2018 students were anxious to know if the age bar will be applicable or not and now the air has been cleared. Yes, there will be an upper age limit.

Ahead of the release of the NEET 2018 notification, CBSE has confirmed two most crucial things, first that it would be providing the same set of question papers for all languages and secondly, the syllabus for NEET UG 2018 will be same as last year.

Two type of merit list will be prepared on the basis of marks obtained in NEET namely, an All India merit list and a State/Union Territory-wise merit list. The will be admitted to MBBS course from the said lists only. The cut off percentile is determined on the basis of the highest marks obtained in the All India Merit List for admission in ‘National Eligibility-cum-Entrance Test for admission to MBBS course.