Union Public Service Commission (UPSC) has declared NDA 2 Result 2017. It has been uploaded as a pdf on the official website and contains the Roll Numbers of the qualified candidates. The list of qualified is also for the 102nd NA 2 exam, which was held with 140th NDA II 2017 on September 10, 2017.

In order to check the result, the candidates either need to visit the official website, which is upsc.gov.in or click here. Those who will access the official website will be required to click on “written Result: National Defence Academy & Naval Academy Examination (II) 2017” link. Have a look at the image below for clarity. In the result PDF, the candidates will have to seek their Roll Number. If it is there, then they will be called for SSB Interview round. 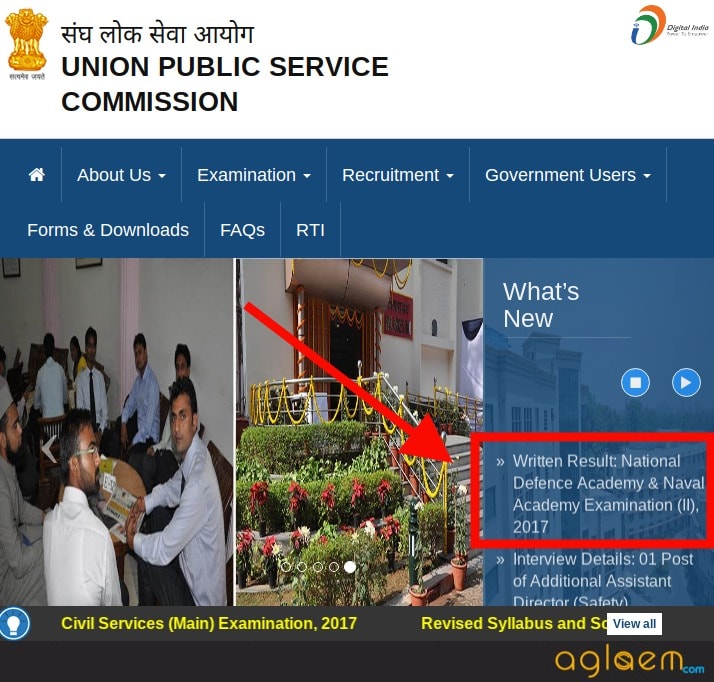 The marks of the candidates will also be announced but later on. It will be uploaded on the official website of UPSC. Candidates may expect the announcement of the score within 15 days from the date of SSB result announcement. The score will be available on the website for 30 days only and after that the provision to check it will not granted.

Total of 6508 candidates has been qualified for SSB, which is 1497 less than the NDA 1 qualified candidates. The dates for SSB interview has not been announced yet. The candidates will be informed about the dates through SSB call letter. However, the provisionally qualified candidates will have to register it now from the official website of Indian Army Recruiting. It is joinindianarmy.nic.in. The registration is to be done within the period of two weeks. The call letter for SSB will be e-mailed to the candidates, at the registered e-mail id.

The successful NDA II 2017 candidates who will register in time will then be allocated a Selection Center and dates for SSB interview. The selection centers are situtated in Allahabad, Bhopal, Bangalore, and Kapurthala.

The candidates will also have to submit original Age and Education Qualification Certificates. No certificate is to be forwarded to UPSC. If a candidate seeks any information regarding the same then they may contact UPSC in person by visting Facilitation Counter near GATE ‘C’ of the Commission or by calling on 011-23385271 / 011-23381125 / 011-23098543 between 10:00 am to 05:00 pm. Indian Army has also notified that if a selected candidate has any query or faces any problem then they may contact the authority via e-mail at [email protected] .

SSB will be a 5 days assessment. Each day will be a new challenge for the candidates. The intelligence, personality traits, officer credibility, and etc will be analyzed. It can be certificated in two Stages – Officer Intelligence Rating Test (OIR) and Picture Perception Description Test. Day 1 will be the screening test for the candidates. On Day 2 they will be required to appear for the Psychology Test and Day 3 and 4 will be for Group Testing Officers Test. On Day 5, the conference will be held by then only the selected candidates will be left.

Congratulation to all the candidates who qualified NDA / NA II 2017. Candidates, who did make it this time may try next year. When one door closes, another one always opens. Even if your age will exceed the minimum limit for NDA to be held next year, you can still join Indian Army through CDS. Just keep trying and success will be yours. Good Luck!…